There are 10-15 species of snakes in Spain. The majority of snakes are non-toxic or harmless to humans, but there are also some types of poisonous snakes. Snake bites are rather rare in Spain, but they do occur. If you are bitten by a snake, you should always consult a doctor or hospital as soon as possible. This also applies to non-toxic or slightly poisonous snake species, as there is a risk of confusion with other snakes, but also dangerous allergic reactions or infections can occur.

Because hardly anyone has ever been bitten by a poisonous snake, you do not know whether you are allergic or not. It is important to move as little as possible after a snake bite. Therefore, it is better to call an emergency ambulance or to be driven to the hospital by car than to walk. The use of a rescue helicopter is also conceivable in remote areas such as national parks. Due to the higher dose of poison per kilogram of body weight, children are significantly more at risk than adults. Many people are in severe shock after a snake bite and are afraid of death. This should not be underestimated. According to Wikipedia and other sources, there are no snakes in the Canary Islands – on the Balearic Islands (Mallorca, Ibiza, Menorca and Formentera) there are. In the following I will briefly introduce some of the snake species in Spain. Getting the information was difficult and it can be faulty. If someone has more information or discovers an error, feel free to send me an email. In the unlikely event of a snake bite you should not rely on the information here, but seek medical help immediately.

Stlip nose viper: This poisonous snake occurs in many parts of Spain and is considered poisonous and dangerous for humans. The snap-nosed viper is rather rare and is classified as endangered. In Spain, the main focus of distribution is on the high mountains and the national parks – but the snap-nosed viper also occurs in other areas. The poisonous animal also lives in Portugal and North Africa, but not in the Canary Islands or Mallorca. The snake is only about 40-60 cm long and has a zigzag pattern, similar to a cross viper (with which the inverted viper is often confused).

Northern Iberian adder (also more rarely called Spanish adder): Also the nerve poison of this adder is considered dangerous for humans. The snake occurs almost only in the northern quarter of Spain. It also has a zigzag pattern but is slightly darker than the snap-nosed viper. Different subspecies are differently poisonous. The poisonous snake has a length of up to 70 cm.

Aspisviper: Also this snake is not harmless for humans. The effect of the poison is comparable to that of the inverted viper or the cross viper. The distribution area of the Aspis viper in Spain is mainly in the north of the country.

It also lives in other European countries, even in Germany (in the southern Black Forest) some specimens were discovered. However, the main distribution of aspis vipers is in France and Italy. It is often brownish (but there are also other colours) and grows up to 1 meter long. It is very active during the day and likes to lie down on the streets to warm up in the sun..

Lizard snake: Dangerous poison bites of this snake are rare in humans for two reasons: First, the lizard snake is very shy. On the other hand, the poison-fangs sit far behind in the mouth of the poison-snake. So one usually doesn’t get any poison at all with the bite. With a length of more than 2 meters the lizard snake is the longest snake in Europe. It occurs in large parts of Spain and Portugal, as well as in many other European countries.

Macroprotodon cucullatus: Also with this poison-snake, the poison-fangs sit far behind in the mouth so that it rarely comes to a poison-transfer with the bite of a human being. It is a small snake (approximately 40-50 cm of length) The hood-snake often is gray or brown and has a pattern. It occurs in Mallorca, Ibiza and southern Spain.

Ladder snake: The name of this snake comes from the stair-like pattern on the back of the younger snake. The snake can be found throughout Spain and the Balearic Islands. It grows to about 1.5 mete long and is often ochre in colour. One often sees stair snakes dead on streets (run over).

Horseshoe snake (Zornnatter): This snake bites quickly at danger and causes deep, strongly bleeding, bite wounds. Often the horseshoe snake even bites several times in quick succession.  The snake has a dark surface (sometimes also dark blue) and lives in whole Spain, usually in dry, desert-similar regions. The length of the adult animal amounts to approximately 1,5 meters. The horseshoe snake belongs to the Zornnatter family. This is why the snake is sometimes referred to more simply as the Spanish Snake. On Mallorca the snake has been introduced and spreads quickly. Especially in the northeast of Mallorca many horseshoe snakes now live. In some municipalities now traps are set up. According to a report from the summer of 2017, several hundred snakes have already been caught in this way. Also on the island Formentera the horseshoe snake occurs meanwhile. The snake species spreads quickly to the Balearic Islands because they have few natural enemies here. On Mallorca and other islands of Spain there is a danger that the snake species will become a big problem in the next decades.

Smooth snake: This small snake is rather harmless and shy. It occurs in many parts of Europe, including Germany, Austria and especially Switzerland. The snake looks similar to a crossed viper. It is common in Spain, but is rarely seen.

Aesculapian snake: This non-toxic snake is in many countries the well-known snake symbol of the pharmacists (Aesculapian staff). The Aesculapian snake is a large snake (up to 2 metres long). It can be yellowish, brown, grey or almost black. 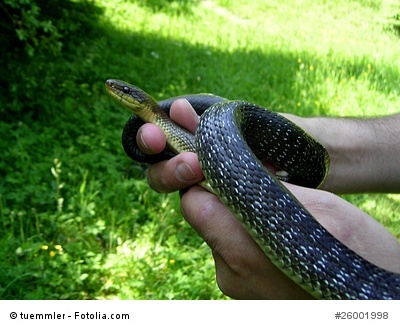 It occurs only in the extreme north of Spain not far from the French border. It is widespread in many European countries, also rarely in Germany (Bavaria) and somewhat more frequently in Austria.

Grass snake: The Grass snake is theoretically a poisonous snake, but the little and weak poison is almost always harmless for humans. 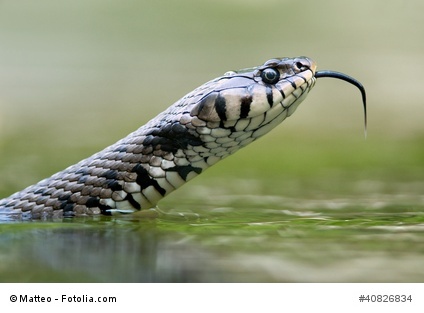 More articles about fauna in Spain: Mammals in Spain ; Birds in Spain; Sharks around Spain