Carihuela is a district of the municipality of Torremolinos on the sunny coast (Costa del Sol) in Andalusia (southern Spain). Like the whole city of Torremolinos, Carihuela is strongly influenced by tourism. The place is pronounced „Kariuela“, the letter h is, as in all other Spanish words, voiceless.

Carihuela used to be a fishing village with a large fishing fleet. After the Second World War there were about 50 boats. In 1948 the first hotel was built, until today many other new tourist buildings followed. Today there are no more fishermen. In the car-free alleys behind the promenade parallel to the sea, the old village Carihuela is still clearly visible. 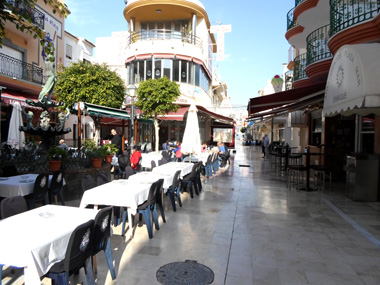 Carihuela is still known in the area for its restaurants, especially fried fish are offered. On weekends and holidays many locals come to Torremolinos to eat fish.

For tourists Carihuela is probably the most beautiful part of Torremolinos. Many smaller guesthouses and apartment complexes offer accommodation. Here one still finds, for the Costa del Sol rather atypically, family pensions with few rooms. There are also apartments (holiday flats) in larger numbers. The rest of Torremolinos consists of characterless large hotels.

The famous fish is eaten in Torremolinos in the many street restaurants. The best taverns are in the second row, so not on the beach promenade. The dish „Pescaíto Frito“, fresh, breaded and fried fish, is especially well known. There are also some cheap foreign restaurants in the fight for tourists. Asian restaurants offer 3-course menus (Menu del Dia) for 5-6 Euros. The „Kleine Kneipe“ serves German food from pork knuckles to currywurst. 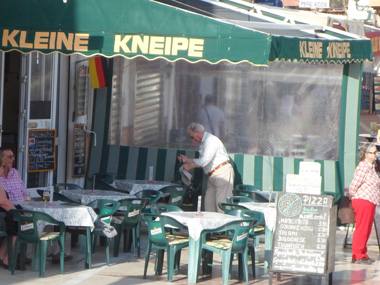 About 80 meters behind the beach runs a larger road, the Av. Carlota Alessandri. There is a bus stop here with frequent connections to Malaga and the neighbouring town of Benalmadena. So you don’t have to go to the centre of Torremolinos to leave Carihuela by public transport. But the train runs clearly above Carihuela, the easiest to reach station is in the centre of Malaga at the Plaza de la Nogalera. From Carihuela, one walks there for approximately 15 minutes. Those who do not want to or cannot walk can take the city bus. A very nice walk from Carihuela is along the beach promenade. After about two kilometres you reach the port of Benalmadena. Also in the other direction, the lively promenade is several kilometres long.

The beach along Carihuela is consistently a clean sandy beach. A big advantage of Carihuela: Cars don’t drive on the pedestrian promenade nor in the old alleys behind it. The important parts of Carihuela are only accessible for pedestrians. 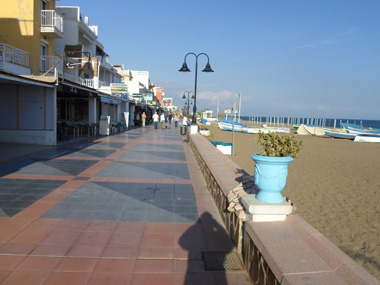 A very large part of the holidaymakers in Carihuela come from the Netherlands. There are several Dutch restaurants and pubs. Carihuela is much more Spanish than the rest of Torremolinos. On Sunday afternoon hundreds of Spaniards come to Carihuela and fill the classic fish taverns despite the economic crisis often to the last place.

Our tip food: A really great and extremely inexpensive small restaurant is the „Cartucho King La Carihuela“ in the street behind the promenade (address Calle San Gines 10, Torremolinos, on the entrance sign „Tapateria King“ is written). There are excellent, smaller fish dishes for 3,50 Euro, two such dishes per person are more than enough. Try „Mixed fish“ and the Calamari. A small beer only costs an incredible 70 cents (January 2015), with a tapa (small dish) only 1.50 euros. Also the house wine for one euro tastes excellent in the Cartucho King. It is an original Spanish tavern without the tourist frills. The friendly owner speaks English.

Our tip for staying overnight: Our top favourite, actually one of our favourite accommodations in Spain, is the apartment complex Apartamentos Niña De Oro in the centre of Carihuela. We spent several very nice weeks in the apartments there. The apartments have two rooms, a well-equipped kitchen, WLAN and much more. In winter we paid only 30 Euro per person (beginning of 2015). The owner doesn’t speak much English and German, but he is very nice and helpful. The accommodation Nina de Oro is in the center of Carihuela, about 50 meters from the beach.