Tickets for the aquarium for the season 2023 should be bought online beforehand. Often the queues at the cash desks are very long:     >>>   On this link you can find the tickets on the internet.

Beside fish there are also some other animals to see. Especially the penguins in the Aquarium Barcelona are well known. The main focus is on the Mediterranean Sea, but also many tropical fish and other sea animals can be seen. Many visitors of the aquarium like for example the big Piranhas very well. 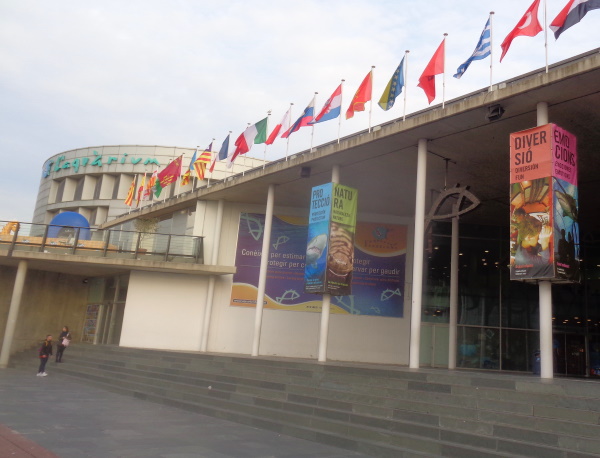 But the absolute highlight in the Aquarium Barcelona is the big tank. In an 80 meter long tunnel, visitors drive through this basin. On the left, on the right and on the top, the fishes can be seen between the glass. In the big aquarium there are also bigger fish like sharks (meter long blue sharks) and rays. An absolutely magnificent attraction! The big tank in the Aquarium Barcelona is called Oceanarium.

Altogether we found the visit of the aquarium very interesting, probably one of the 4-5 highlights of our Barcelona trip. We found the entrance fee of just over 20 Euro a little high, but it is also one of the best aquariums in the world.

Entrance fees Aquarium Barcelona: The aquarium currently (Januar 2023) costs 25 Euro entrance fee. The price is the same, no matter if you buy the tickets on the spot or before on the internet. Due to the long queues, we strongly recommend to buy the tickets for the Aquarium Barcelona online beforehand. We even waited for half an hour on a Wednesday in November. In the season the waiting lines should be much longer.
>>>  On this link you can find the tickets on the internet

Opening hours Aquarium Barcelona 2023: The Aquarium is open every day of the week. It opens at 10 a.m. all year round. Depending on the season and day of the week, the largest aquarium in Spain closes between 7:30 pm and 9 pm.

Approach Aquarium Barcelona 2023: The aquarium was built in the city centre in the sea (in the 90s). At the end of the world-famous pedestrian zone of Barcelona La Rambla one goes over a pedestrian bridge to the aquarium. With the car, one will have big difficulties to find a parking place nearby. Drassanes (line 3) and Barceloneta (line 4) are close to the subway station of the Metro Barcelona.

Other visitor information: There is a restaurant and drinks from the vending machine in the Aquarium of Barcelona. But especially the drinks are quite expensive, a Coke about 3,50 Euro. It is better to bring something to drink yourself if you want to stay longer. The toilets are ok. At the exit there is a big shop with souvenirs about aquariums and Barcelona in general. Next to the aquarium there is a big shopping centre with many shops and gastronomy, also McDonalds etc..

Tickets for the aquarium should be bought online beforehand. Often the queues at the cash desks are very long:     >>>   On this link you can find the tickets on the internet.