Benidorm is a city of superlatives. Nowhere in the world is there a city with more skyscrapers per inhabitant. Four of the nine highest residential buildings in Spain are located here – a total of almost 400 buildings with more than 12 floors. The skyline of Benidorm reminds of Rio or New York and is absolutely unique at least in Europe. Most of the tall buildings in Benidorm are hotels. Every year, millions of tourists come to the city on the Costa Blanca with just 80,000 inhabitants. Also in winter there is something going on here. The high mountains behind Benidorm often protect the city on the Costa Blanca from bad weather. Even on some winter days, the beaches are well visited and the temperatures in the afternoon are over 20 degrees.

There are hardly any sightseeings in the classical sense in Benidorm. In the centre, one recognizes the old town centre. Today, there are many British pubs in the few old streets. At the shore in the centre, a balcony was built out into the sea (the famous „balcony of the Mediterranean“). From here, one has a magnificent view to the high-rise city Benidorm with the two beaches. 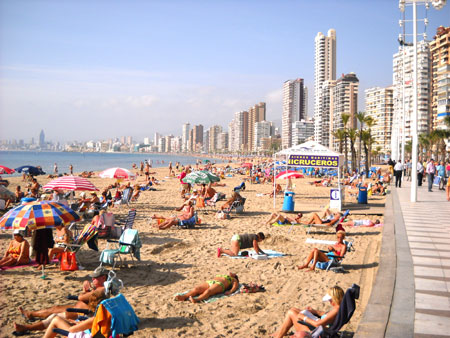 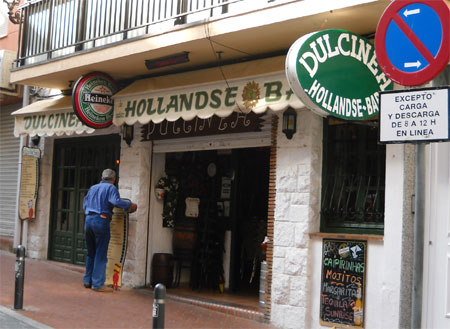 An attraction in Benidorm are certainly the many skyscrapers. In the picture above is the Gran Hotel Bali, the highest hotel in Europe and currently the highest building in Benidorm (52 floors, 186 meters high). Almost all skyscrapers near the beach are hotels, in the hinterland also many skyscrapers were built as residential buildings. In Benidorm the land prices are very high due to the lack of space, which leads to the fact that even further away from the sea in the height is built. 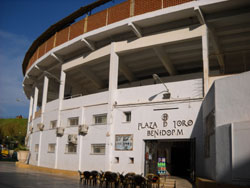 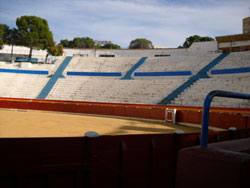 Benidorm is as far as I know the only tourist city in Spain where a bullring was built. In the summer months thousands of tourists come to the bullfights, the stadium is often sold out.

There are also four large theme parks in Benidorm.

Benidorm is the transfer point for the two narrow-gauge railways on the Costa Blanca. One line connects Benidorm and Alicante every 30 minutes, the other line Benidorm with Denia once an hour. The trains stop in all holiday resorts on the way. Of course, Benidorm also has an important bus station. From here there are frequent buses to all towns in the area and all important cities in Spain. Unfortunately, the train station is about 2 km and the bus station about 3 km from the centre. But there is a good city bus network in Benidorm, which connects the leisure parks in the surroundings, the beaches, the centre and the (bus) stations with each other. Public transport is cheap in Spain.