One of the most popular tourist activities in Barcelona is a tour of the world famous Camp Nou stadium of FC Barcelona. It is the largest football stadium in the world, it has almost 100,000 seats (exactly 99,354). Every day thousands of fans and tourists visit the stadium in Barcelona. 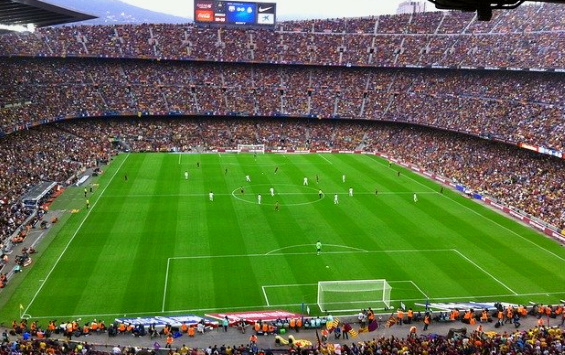 You can walk through the venue yourself or join a guided tour. You can see a lot of things, including the inside areas such as the cabin, press room, boxes, player’s tunnel, sitting on the reserve bench, nearby playing field and much more. The ticket also entitles the holder to visit the legendary FC Barcelona museum, which is also located in the Camp Nou stadium.

Unfortunately, the entrance fee is quite high, but in our opinion it is still worth it. It is perhaps the most famous football stadium in the world. You can see a lot.

You should definitely book in advance on the Internet, for 2 reasons: First of all, the tickets for the visit in the internet are a little cheaper (from 26 Euro for adults) than on site at the stadium Camp Nou (from 29,50). You also have to pay for guided tours or an audio guide. Reason 2: Access is very restricted. Very often, you do not get a ticket for the next hours or even the whole day. The stadium tour in Barcelona often makes many thousands of visitors per day.

Stadion Tour Barcelona Camp Nou: What exactly do you see?

First you get through parts of the museum of the FCB. Here you can see the trophies and the many successes. No other team in the world has been more successful in football than FC Barcelona in recent decades. The museum also deals with the Catalan identity of the club. The motto of the club „Mas que un club“ (More than a club) is also explained in detail.

Afterwards the tour through the big stadium in Barcelona starts. First you get into an upper area on the main stand. You can sit down on a spectator seat and has a wonderful view of the whole stadium with playing field. 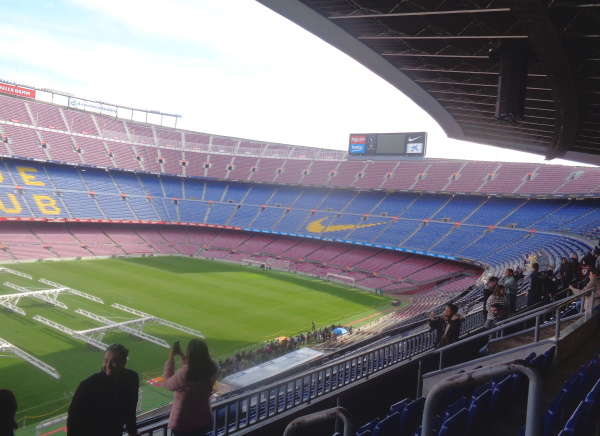 You walk through a changing room with whirlpool etc., through rooms for press conferences, even the small church in the stadium can be seen. 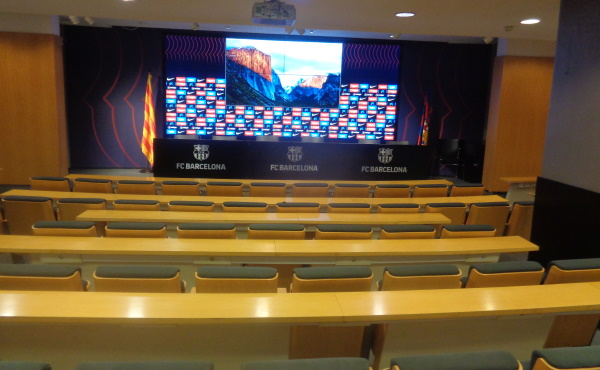 Through the legendary player tunnel you get to the edge of the playing field between the two benches. 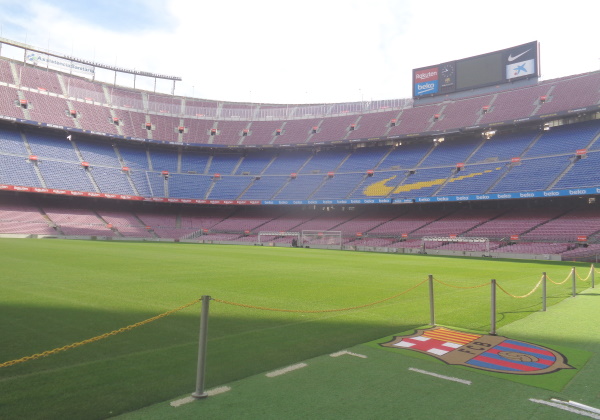 You can sit on a seat of the coach or the substitute player. 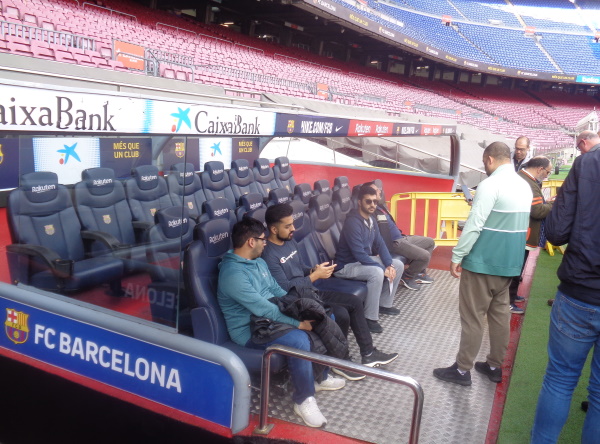 Afterwards you pass through the boxes, the places of the presenters (television and radio) and much more. In the stadium tour you can see everything important in the stadium Camp Nou Barcelona. A great experience for every football fan. In our opinion it is worth the quite high entrance fee.

Finally, you get through the modern multimedia room with films etc. and a gigantic fan shop, like a department store with 3 floors.

We did a tour without everything. That means we were allowed to stay everywhere without a guide as long as we wanted, every visitor has a different focus and a different speed. We stayed especially long on the grandstand and on the pitch. We didn’t have an audio guide or a guided tour. You see a lot, we think it’s almost all self-explanatory, you don’t necessarily need a stadium tour or an audio guide, but of course it’s an advantage. As I said, it is essential to book online tickets on the Internet.

Note for disabled people: You have to climb some stairs during the stadium tour in Barcelona. There are not lifts everywhere.

There are the following options to visit the stadium in Barcelona:

You walk alone through the stadium without a guided tour. Audio-Guide can be booked on site, if you want (6 Euro extra).   >>>  Here Click here to get the tickets online

Guided tour through the Camp Nou Stadium in Barcelona. You get so much background information  >>>  Click here you gut the tickets online 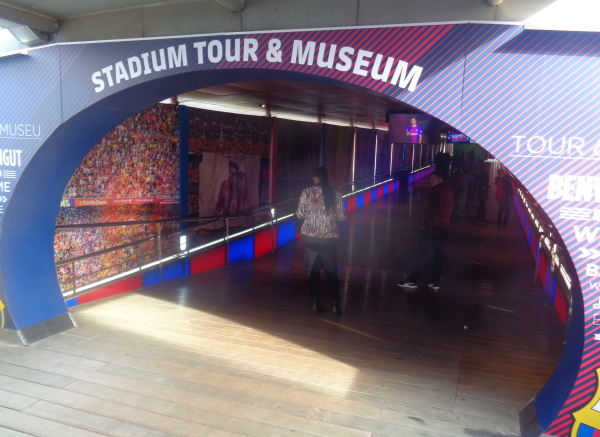 It is open every day, during the week and on weekends. The tours through the FC Barcelona Stadium are of course severely restricted on match days (home matches). It is better to choose another day.

By car, if you can find a parking space in the area. This is possible, but not easy.

Like most fans, the best way to get to the stadium in Barcelona is by metro. The station „Collblanc“ is a good 200 meters away. (Line 5 from the city centre, as well as lines 9 and 10).