The city of Marbella is the heart of the Costa del Sol. Besides Malaga, Marbella is the only big city on this stretch of coast with 140,000 inhabitants. Even though the area around Torremolinos meanwhile attracts more tourists, Marbella is by far the most famous holiday resort of the Costa del Sol. Above all, richer tourists come here, while the area from Fuengirola to Torremolinos is rather visited by people with normal or low financial possibilities.

The two important areas in Marbella are the small old town and the promenade on the Mediterranean shore. The central square in the old town „Plaza de Naranjas“ (Orange Square) is known far beyond Marbella, but actually nothing special. On the green square there are some cafes and restaurants with high prices. Also the tourist information of Marbella is here. The information is good and friendly, one gets a free city map. 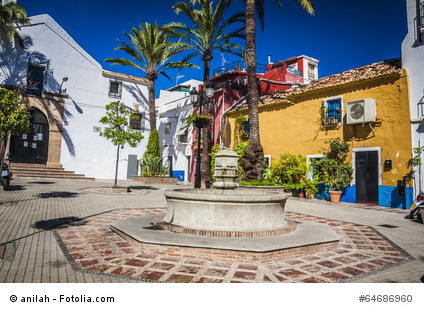 The rest of the not too big old town of Marbella consists of small, picturesque alleys with many shops. Especially clothes, jewellery and souvenirs are offered.

At the long promenade of Marbella there is a lot going on during the day and at night until the early morning. There seem to be an infinite number of restaurants, discos and cafes trying to attract the many tourists. The price level in Marbella is clearly higher than in most other places in Spain. This is not only true for the restaurants, but also for the hotels. Not everywhere, however, the quality in Marbella is higher, the price-performance ratio is the other places on average better. But Marbella is something special. 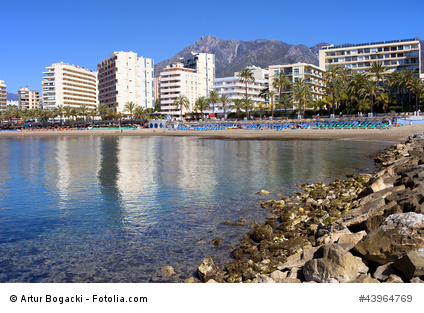 Between center and sea is a small park with large tropical places. The name of the city park of Marbella is Alameda Park. 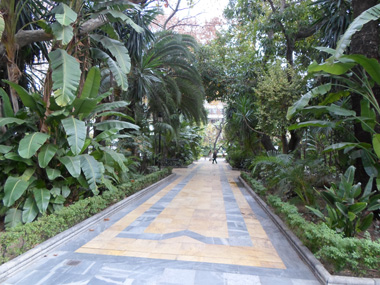 Marbella has one of the largest proportions of foreigners of all cities in Spain with about 30%. On the one hand there are many extremely rich foreigners from Great Britain, Germany and Saudi Arabia living in Marbella. There are also the poor immigrants from Africa and Latin America. Over Marbella are several thousand luxury villas, in which predominantly foreigners live. The city of the rich on the Costa del Sol has a very high millionaire density. The true number of foreigners is probably much higher, since not all who live here also register.

Marbella is the only big city in Spain without a railway connection. The railway from Malaga to Fuengirola is to be extended to Marbella at some point, but at the moment there is no money for it due to the debt crisis of public finances in Spain. The buses remain. The bus station is about 1.5 kilometers north of the old town near the highway. One goes from the „Estacion de Autobus“ over the bridge, the street „Camino del Trapiche“ leads directly to the old town. If one crosses the old town, one is not far away from the sea. Buses often depart from Marbella to the big places of the Costa del Sol including Malaga. About 8 to 10 times a day there is a direct bus to Malaga airport (45 min drive). Marbella does not have its own airport. A one-way trip to Torremolinos, Malaga or the airport costs about 5 Euro (all destinations are about 50 km away, prices in early 2015). From Marbella you can also take the bus directly to more distant destinations such as Madrid, Granada or Seville. The city bus line 79 connects the bus station with the city centre and Puerto Banus. The 7 km harbour of Puerto Banus is worth a visit, more information here.

Here you can buy tickets for the cathedral Florence on the Internet.