Altea is a holiday resort on the Costa Blanca with about 20,000 inhabitants. The place is especially popular with German holidaymakers. Although in summer many thousands of tourists spend their holidays in Altea, it is clearly calmer here than in the neighbouring town and mega holiday resort Benidorm. Altea is rather popular with older tourists. Also many of the inhabitants come from Germany – for the most part pensioners, who spend their retirement here. The name of the city is world famous since Seat named a car model after her (Seat Altea). Altea has a beautiful old town with a towering church and narrow streets with snow-white houses. 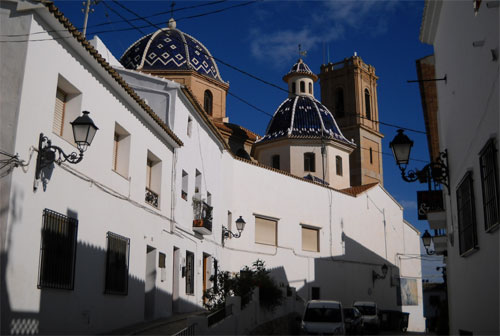 The old town is perhaps the most interesting on the Costa Blanca. The narrow streets with the white houses remind rather of southern Spain and are atypical for the region. The old town of Altea is located directly behind the beach and is full of sights. It is situated on a steep slope. The ascent to the church square with the church described below is worthwhile. On the one hand, the large square is the centre of the city. Here you can meet some nice cafés, street musicians and artists. On the other hand you have a great view from the church square to the sea, the beach and the city of Altea including the small railway station for the narrow-gauge railway. The whole old town is free of cars. The steep alleys partly consist of steps, which are an insurmountable obstacle for motor vehicles. The many flowers in the streets, which are cared for by the residents with much love, increase additionally the charm of Altea. One gets the impression that Altea places more value on the preservation of the place and the culture than on money and commerce. Herewith, Altea stands in a pleasant contrast to the northern neighbour Calpe and even more to the 10 km south situated Benidorm, the biggest tourist place of Europe.

The most striking building is the church Nuestra Senora del Consuelo at the highest point of the old town of Altea. Its blue dome roofs are a nice contrast to the otherwise snow-white houses. 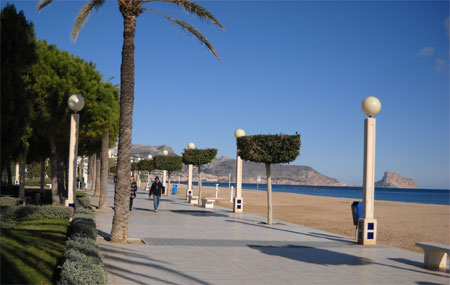 The promenade behind the beach of Altea looks like the whole place maintained. It is varied. In some places, as in the picture above, there is a small green area next to the shore path, in other places there are restaurants and cafés. The restaurants are strikingly international – there is even an Argentine steak house and a Japanese restaurant. The beach itself is ok, although partly no sandy beach but pebbles.

The only less beautiful thing in Altea is the federal road that runs one block behind the shore and separates the shore from the old town. Otherwise, Altea is a perfect holiday resort on the Costa Blanca.

By train: From Benidorm, Denia and Alicante (with a change at Benidorm) there are hourly narrow-gauge trains (similar to trams) to Altea.

The Benidorm city bus line 10 connects Benidorm and Altea approximately every 15 minutes during the day.

Altea is easy to reach by car: take the Altea exit on the coastal motorway and follow the signs to the city. There are parking lots all along the shore, but they are often occupied near the city centre. You can simply park a little further out (near the harbour, for example) and then walk into town.