Benalmadena is a tourist city on the Costa del Sol in the south of Spain about 20 kilometers south of the metropolis Malaga. The city has about 70.000 inhabitants and has grown completely together with the municipality Torremolinos. If one leaves Benalmadena in the other direction, one gets to Fuengirola. This is also a mega-tourist place.

Benalmadena can be divided into three important parts: Along the sea is the district Benalmadena Costa, which is very strongly influenced by tourism. Leaving the coast, the route climbs steeply up the mountain. In Arroyo de la Miel is the Spanish centre of the city. Further up is Benalmadena Pueblo, the old village ( pueblo means translated village). The place name is emphasized on the syllable ma, thus BenalMAdena. 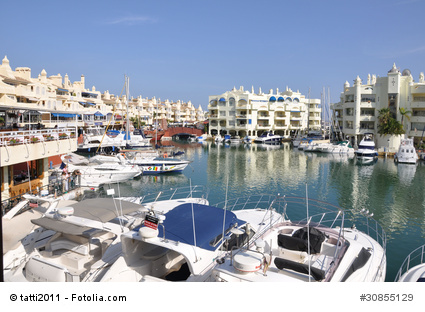 Here you can see thousands of big and small yachts. The integration of the harbour into the city is particularly successful. Along the ships there are restaurants, cafes and a small shopping centre called Puerto Marina Shopping. Also the aquarium „Sea Life Benalmadena“ is in the harbour.

This is the part of Benalmadena where most of the inhabitants of the city live. Here you can find normal shops and the train station. On foot it is quite exhausting from the coast to Arroyo de la Miel.

Picturesque alleys, romantic squares – Benalmadena Pueblo is a village as you know it from travel brochures. 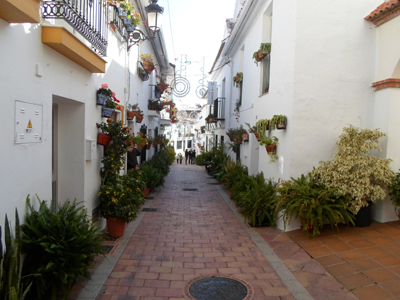 Especially the view from the churchyard to the Costa del Sol is very special. From a height of several hundred metres one can see large parts of the coast as far as Malaga. Already for this reason the visit of Benalmadena Pueblo is worthwhile.

Also there castle is a sight worth seeing. About every 30 minutes a bus from Torremolinos and Benalmadena Costa goes up here. The bus number 121 costs only 1,55 Euro. A cheap and great excursion from the Costa del Sol.

The Charles Bridge Prague is the most important crossing over the Vltava River in Prague.

The problem with travelling by S-Bahn from Malaga and Malaga airport is the location of the Benalmadena train station. It is far away and above all high above the tourist area Benalmadena Costa. The way is quite long on foot, most holidaymakers take the bus down from the train station. From Malaga it is easier to take the bus to Benalmadena Costa. But be careful: in Malaga these buses do not depart from the central bus station, but from the smaller bus station at the harbour (bus line 110). The journey to Benalmadena by train as also by bus from Malaga is inexpensive (about 2 euros easy). You can get bus tickets from the driver, tickets for the S-Bahn (in Spanish the trains are called Cercanias) at the ticket machines at every stop.

All about Dubai UAE (travel guide)