The Alhambra in the southern Spanish city of Granada is an absolute top attraction. On many top lists the Alhambra is listed as one of the top 10 sights in Europe, often the Moorish castle is even the number 1 sight in Spain.

Our tip:  On this website you can book a good tour with a guide through the famous castle Alhambra online. In general you should buy the tickets for the Alhambra in advance to avoid long queues.

The Alhambra is a huge fortress as well as a palace on a hill in Granada. It is certainly the most important Islamic building in Europe. The Alhambra was built mainly in the 13th and 14th centuries. At that time parts of Spain were under the rule of the Moors, thus the Arabs. These conquered already some centuries before parts of Spain from North Africa. The fortress was gradually built and extended. The fortress Alhambra has the gigantic length of nearly 800 meters and a width of over 200 meters. 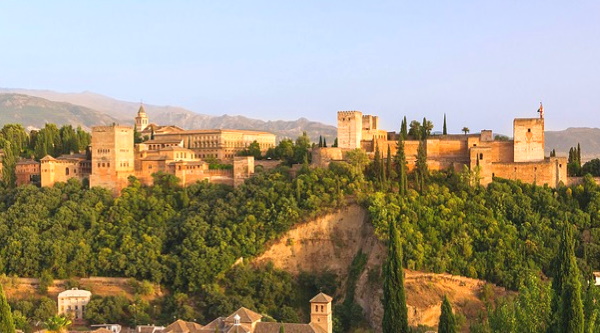 No matter how much you are interested in history, art and architecture, we think you simply have to visit the Alhambra when you are on holiday in this part of Spain. The grandiose architecture of the individual building complexes within the fortress is simply more than worth seeing. There is much to see, plan several hours. The Alhambra is almost 800 metres long and over 200 metres wide.

It is better to buy tickets in advance. Also a guided tour is more than recommendable. Those who walk through the Alhambra without a guided tour should read a lot about the building before, otherwise you simply miss the most beautiful and best.

The Alhambra is open every day of the year with 2 exceptions. It is only closed on New Year’s Day and Christmas Day.

In winter there are slightly reduced opening hours for the Alhambra from 8:30 am to 6 pm.

Late in the evening, after dark, some parts of the Alhambra open again. This applies for example to the palace (Nazarite palace) and the great gardens. In the summer this is from 10 pm to 11:30 pm and in the winter, with earlier darkness, from 8 pm to 9:30 pm. In the winter these opening times are in the evening however only on Friday and Saturday, in the summer 5 times the week (not: Sunday and Monday).

Caution: In the Nazarite palaces you can only stay 30 minutes because of the many people.

On foot: It is only about 1 kilometer from the city center of Granada up to the Alhambra. However, it is very steep and exhausting (partly over 20% gradient). Those who are a bit fit should not have any problems, after the visit of the Alhambra downwards you can walk more easily.

By public bus: There are several lines. The lines C30 and C35 go to the city centre of Granada to the Alhambra.

By car: There is a large car park signposted. From the city centre of Granada, however, you have to take a longer detour.

From 1238 to 1492 Granada was the capital of the Islamic part of Spain. Already the first Sultan, Mohammed I, had the first part of the fortress built. It is the part of the Alhambra now called the Citadel. Some sultans after him built the palace and the fortress Alhambra further and further. Many of the buildings in the Alhambra that are admired today date from the 14th century, especially by Yusuf I (Sultan from 1333-1354) and Muhammad V (1354-1391). Not only the buildings are great, but also the gardens and irrigation systems. The Alhambra became bigger and bigger. They were surrounded by a thick wall and many watchtowers. For centuries Christians from the north threatened to attack the then only great Islamic empire in Europe. Thus the Alhambra in Granada became one of the largest fortresses in the world, and hardly any other castle in all of Europe was so well fortified.

For centuries the Christians did not dare to attack Granada directly. But they conquered more and more areas of the Moors. At the end of the 15th century there was an attack on the Alhambra in Granada itself. At the beginning of 1492 the Muslims capitulated and gave up Granada and the Alhambra. The time of the Moors and Arabs in Europe was over.

The Alhambra now became Christian. In the first months a cruel persecution of all non-Christians took place in Granada. Above all, many Jews were killed in 1492, Arabic books were burned.

Later, the huge, former castle Alhambra over Granada was hardly used and partially decayed. Napoleon liked the building, he put a lot of money into the renovation. Until today the reconstruction is not completely finished. As one of the many thousands of visitors daily, you can today admire again many of the building parts and gardens of the Moors from the late Middle Ages.

Our tip:  On this website you can book a good tour with a guide through the famous castle Alhambra online. In general you should buy the tickets for the Alhambra in advance to avoid long queues. 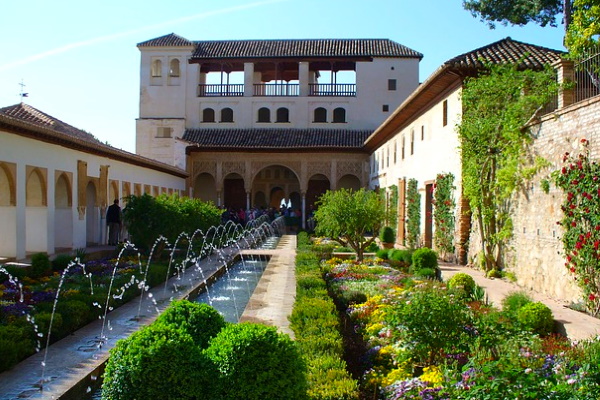 Alhambra: Important sights and layout of the buildings

The Wall and Towers: The gigantic wall around the Alhambra Granada is the most important defense of the fortress against enemies. In addition there are the towers, partly very impressive, big and high.

The palaces and gardens: Most visitors to the castle above Granada stay here the longest. This is the most beautiful and famous part of the Alhambra. The lion yard and the throne room, for example, are well worth a visit. But also the gardens and fountains belong to the big sights in the Alhambra.

Christian Palace: Also worth seeing is the palace of Charles V. It was built in the 16th century after the expulsion of the Moors (Muslims).

The city: Large parts of the Alhambra were for the employees, such as residential quarters and gardens. This part is also called palace city.