Figueres is a famous city in northern Spain and home to the world famous artist Salvador Dali. The city (about 50,000 inhabitants) is located only 20 km south of the French border and is the first stop for many tourists who travel to Spain by car, camper van or train. The busy motorway E15 (in France A9, in Spain AP7) between France and Barcelona leads directly past Figueres. Just behind the border Spain shows itself from a beautiful side. Figueres is certainly one of the most interesting cities in Spain and has an outstanding sight: the world-famous Dali Museum, one of the most visited art museums in Spain. Figueres is both the birthplace and the place of death of Salvador Dali. In Spanish, the city is called Figueras, but the Catalan name Figueres is used much more frequently. Figueres is the most popular day trip destination of the many tourists on the Costa Brava, the Spanish coast north of Barcelona. The city is about 20 km from the sea.

Almost all come because of the Dali Museum, the dominant sight in the city. Even from the outside, the „Teatro Museu Dali“, as it is officially called, is a sight to behold. 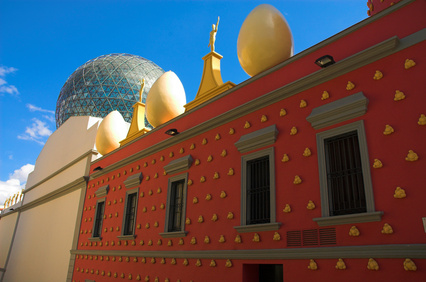 Above the entrance there is a huge globe, on the playful towers huge replicas of chicken eggs. The bright red walls are decorated with „rolls“. In the Dali Museum one finds mainly works of the surrealistic, eccentric artist Dali. There is also a special exhibition of other artists of the surrealism style. By the way, Dali was not only a painter, but also a stage designer, sculptor and designed art objects. One of the most famous stands in the courtyard of the Dali Museum Figueres, the rain taxi. By the way, Dali also designed most of his museum himself. He lived from 1904 to 1989, the Dali Museum opened in 1974. Salvador Dali loved his museum so much that he even had himself buried there. Opening hours: In the summer from 9-20 o’clock, in the winter from 9-18 o’clock. In summer 7 days a week, in winter daily except Mondays. Entrance fee for adults: Currently 12 euros (in 2013). The Salvador-Dali Museum is located near the centre of Figueres. Early in the morning there are queues in front of the entrance, the museum is very popular. If possible, you should come at unusual times and not on weekends. During our visit on a Saturday in January we had to wait in line for about half an hour at 10 o’clock in the morning. In the summer, of course, there is much more going on.

Another good museum in the city is Museum De l’Empordà. Emporda is the name of the region around Figueres, which is well known for its wine growing. Who has time should look around in the wine areas a little, they belong definitely to the objects of interest of north Spain. In the museum one finds historical from the region with many objects from the early time, in addition, works of art from the region from different epochs. Dali was by far not the only artist from the area. Those who have already been to the Dali-Museum and still have the ticket, have free entrance to the museum De l’Emporda, otherwise the entrance fee is 4 Euro.

Otherwise, a walk through the old town of Figueres is worthwhile. One sight is, for example, the church of San Pere. Outside of Figueres, the castle Castell de San Ferran is a frequently visited sight. It is considered the largest castle complex in Europe!

Overnight Figueres: We stayed in the small hotel Los Angeles in Figueres. It is not far from the city centre and only 3-4 minutes from the Dali Museum. Simple but inexpensive rooms (single room out of high season about 30-40 Euro, double room about 10 Euro more). WLAN, TV (only Spanish, Catalan and French programs) and even a bathtub were available in our room. Very nice and helpful staff, clean and tidy family pension without much frills. Other hotels and guesthouses in the centre of Figueres that have a good reputation are the Plaza Inn Hotel, the Duran Hotel, the Pirineos Hotel and the Rambla Hotel. Out of season these accommodations all cost about 55 to 65 euros for two people. Many of these hotels can be booked on Booking.com (including holiday apartments and other accommodation such as hostels).

Essen Figueres: There are many restaurants in the city that have adapted to the needs of tourists. Around the Dali-Museum you will find some inexpensive fast food restaurants with international cuisine – hamburgers, pizza, hot dogs, sausages with chips and the like. Interesting is the restaurant „König“, a restaurant with German cuisine, which is intended for Spaniards. In Figueres there are also many good tapas bars and high quality restaurants at affordable prices.

Train to Figueres: Watch out, there are two stations. From the old station the local trains depart to Barcelona. It is about 500 meters from the center. The new station called Figueres Vilafant is about 1.5 km from the city centre. This is where the fast AVE trains (the Spanish high-speed railway) stop. They mainly go to Barcelona, Madrid, Lyon and Paris. Those coming from Germany have to change trains, mostly in Lyon. Almost every express train has a bus from the bus station (see below) and from the city centre to the AVE Figueres Vilafant station (1.70 euros in 2014, the ticket is available from the driver).

Buses Figueres: The bus station is about 100 meters from the old train station. From Figueres you can take the bus mainly to the surrounding area, also to the Costa Brava to the sea.

Taxis Figueres: Taxi stands can be found at both train stations and at the central street „La Rambla“.