Almunecar (Spanish spelling: Almuñécar) is a place name that is particularly difficult for Germans to pronounce. You say for instance „Almu-néckar“, whereby it is important that the emphasis, as with the German river Neckar, on the e does not.

The small town is located in the south of Spain. It is the most important holiday resort on the Costa Tropical. But the number of tourists in Almuñécar is much lower than in the Giga resorts on the Costa del Sol, which starts a few kilometers west of the city. Almunecar is a pretty good combination between a small Spanish town and a holiday resort. Besides tourism there are other sources of income like agriculture (many greenhouses) and fishing. 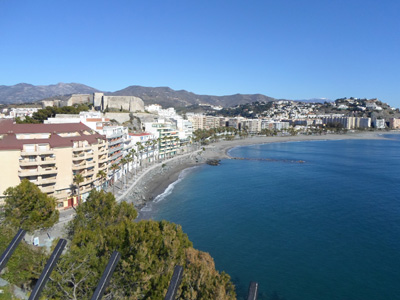 The center of the city is in the small streets behind the large promenade on the beach. Not everything here is yet adjusted to tourism. The small shops in the city centre still make a siesta. Between 14 o’clock and 17 o’clock is locked.

The promenade of Almunecar is very nice, at least if you look towards the water. Yousee a lot of tropical plants like palms and a long beach.

On the beach there are some beach bars with tropical looking roofs made of plants. The long beach is a sandy beach with some pebbles.

There are many places of interest in the tourist capital of the Costa Tropical.

It is best to get a city map at the tourist information. It is in the Avenida de Europa, which is not easy to find. Fortunately, there is a branch in the centre at the promenade, which unfortunately was closed during our visit in winter.

Some other sightseeings in Almunecar are also in the Avenida de Europa. First, there is the small botanical garden that is worth seeing because of its tropical variety of plants. The entrance is free. The climate at the Costa Tropical is warm enough even for trees from the rain forests of Latin America.

The aquarium of Almunecar is one of the largest in the south of Spain. It is also in the Avenida de Europa much further away from the sea. It is easy to overlook, it is opposite the indoor swimming pool and the large market hall (mercado). The indoor swimming pool can also be used as a tourist (good sports swimming pool). Unfortunately, the entrance fee to the Aquarium Almunecar is not very cheap. But you can see a lot. Gigantic pools with huge fish fascinate the visitors. The entrance fees of the Aquarium Almunecar are at the beginning of 2015: adults 12 euro, children between 4 and 12 years as well as pensioners over 65 years 9 euro. Opening times all year round from 10 to 14 o’clock and from 18 to 20 o’clock. Depending on the season, the aquarium has two more hours open: In winter this is for example from 16 to 18 o’clock and in summer from 20 to 22 o’clock. Whether it is worth it must decide everyone: It depends on the interest and the size of the holiday fund.

A natural sight in the southern Spanish city is the Penon. It is a big rock, about 30 meters high, which divides the beach of Almunecar into two parts. From the top you have a magnificent view of Almuñécar and the Mediterranean Sea, which shines in different shades of blue. A path with steps leads up to the summit. At the top is a large square with a cross. 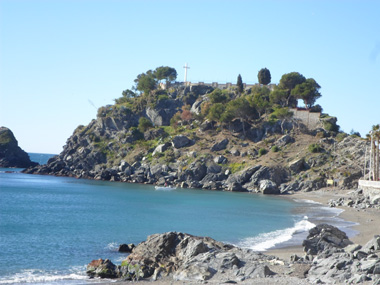 Only about 50 meters from the foot of the Penon rock is the entrance to the bird park Almunecar. It is a small zoo with a focus on parrots. It is also called parrot park. The official Spanish name is Parque Ornitologico Loro Sexi. Many, especially larger, birds can be found in the small but very nice zoo. In addition there is a very interesting cactus garden with large cacti from different parts of the world. In addition there is a lot of green and two ponds with water birds. Unfortunately not all signs are bilingual (Spanish and English), some are only Spanish. The entrance fee to the bird zoo is only 4 Euro for adults and is absolutely worth the money. Opening times of the parrot park (bird park) Almunecar 11 to 14 o’clock and 16 to 18 o’clock, in the summer in the evening clearly longer.

In the middle of the city is a large castle that can be visited. The Castello San Miguel costs 2,50 Euro entrance fee. It was built by the Moors, before the Romans had already built a castle up here.

Our personal favourite is the Hostal Tropical in the Avenida de Europa only about 50 meters from the sea. The rather simple rooms are very inexpensive, the staff extremely nice. Unfortunately, in our room the WIFI only worked badly. If this is important, you should make sure to get an appropriate room.

For those who have greater financial possibilities, the red Hotel Casablanca is recommended. It is one of the most beautiful houses in Almuñécar directly at the sea behind the big rock. 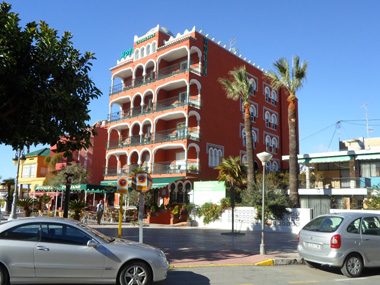 The city does not have a train station, there is no railway in the surrounding area. Thus, one is dependent on the buses. The bigger bus station Almunecar is about one kilometer away from the sea in the back area of the small town. 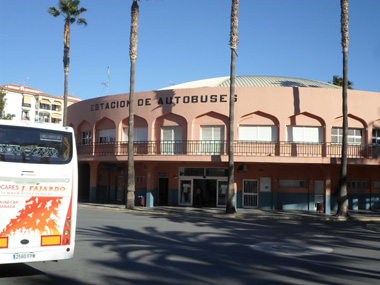 Buses often go to Malaga and the neighbouring Nerja on the Costa del Sol. If you want to go to Malaga, you should take care to get a direct bus. The connection at 11:30 takes for example only 75 minutes, other buses need more than 2 hours. The fare to Malaga is 6-7,50 Euro depending on the bus (information as of the beginning of 2015). To Granada you can make a day trip by bus from Almunecar. There are about 8 buses per day in each direction, travel time starting from 75 minutes. Those who want to see the Alhambra Granada should make sure that they leave early. The visit of the fortress Alhambra takes a lot of time and the rest of Granada (oldtown) is also absolutely worth seeing. More buses go to other places in the area. There are also long-distance buses, for example to Almeria. Tickets can be bought at the ticket counter in the bus station or at the vending machine. Next to the bus station is a large McDonalds. Of course, private companies also offer excursions (day trips). Destinations are for example Granada or Malaga.

A good pub and Irish pub in Almunecar is the Mississippi right in the centre not far from the promenade. In summer there is a lot going on in the city until early in the morning, but in winter Almuñécar is rather a sleepy small town.