In the very south of Spain on the Atlantic coast, Cádiz is probably the oldest city in Europe, at least the oldest urban settlement that was continuously inhabited. The old town of Cadiz is a tourist attraction in its entirety. It lies on a peninsula. The 3,000 year history of the city is alive here. It is one of the most beautiful old towns in Spain. The Neustadt, outside the peninsula, however, consists to a large extent of lovelessly built concrete houses. As a tourist, it is sufficient to visit only the old part of Cadiz. Today, Cadiz has approximately 130,000 inhabitants and belongs to Andalusia. It is the biggest city at the southern Spanish Atlantic coast, thus the biggest city west of Gibraltar.

The most important sight of Cadiz is the old town itself. In almost every alley you could make a historical film. Many of the cobbled narrow streets of the old part of Cadiz end in a historic square with pigeons and monuments. One of the most beautiful squares is the Plaza de San Juan de Dios, built in the 15th century. In this square stands the old Ayuntamiento (Town Hall). Plaza de Falla is home to the famous Gran Teatro Falla theatre, named after the composer Manuel de Falla. He is buried in the cathedral of Cadiz. 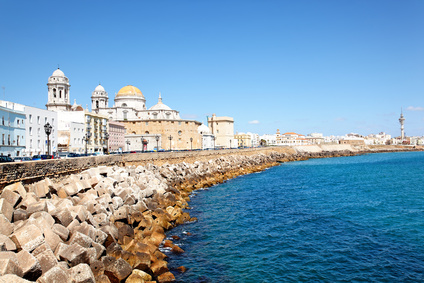 Many other buildings bear witness to the long history of Cadiz. Torre Tavira is the highest preserved lookout tower and the highest point in Cadiz. It was built to see arriving merchant ships earlier. Today the room at the top of the tower is used for another purpose: With the help of a technical device and a mirror, live images from the old town are projected onto a screen. The thing is called „Camera Obscura“ and is a popular attraction for tourists.

Of course, a city like Cadiz has a good city museum (city history, archaeology and paintings). Another nice sight is the doll museum of Andalusia. In the church Santa Cueva (Holy Grotto) the visitors marvel at the world-famous wall paintings of Francisco de Goya from the late 18th century.

As a tourist you should also visit the central food market of Cadiz. As Cadiz is a peninsula surrounded by water, there are also many long beaches. The Playa de la Caleta between the castle San Sebastian and the castle Santa Catalina is the best beach in the old town. Because of the frequent high waves it is also popular among surfers. If you are looking for a beach with mostly less high waves, Playa de la Victoria in the new town is the right place.

The train station of Cadiz is located at the entrance of the peninsula to the old town. There are hourly trains to Seville and Jerez. Some go on to Madrid. Due to the thin rail network in southern Spain, intercity buses are a very common means of transport. With the buses, one gets almost everywhere. Cadiz is the only port on the Spanish mainland where ferries depart for the Canary Islands. But they rarely sail, about once a week.