Valencia is the third largest city in Spain. About one million people live in the city (with an area of almost two million). The city is situated by the sea, although the centre is a few kilometres inland. Valencia, rich in historical buildings, culture and nightlife, is one of the most visited cities in the country by tourists. 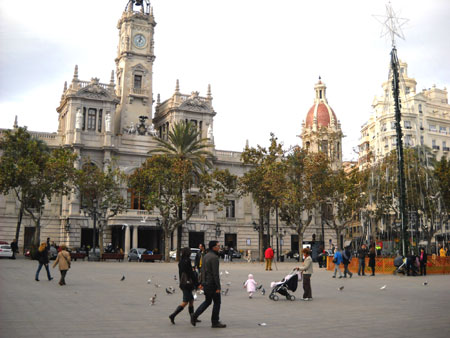 The itinerary described here starts at the central station „Estación Valencia del Norte“, where many trains arrive. In the tourist information next to track 1 you can get a lot of information and an excellent free city map.

Opposite the main station, one enters the small pedestrian zone next to the Mcdonalds. One quickly reaches the town hall square (Plaza Ayuntamiento) with the grandiose town hall and the no less worth seeing main post office building of Valencia.

Continuing straight ahead, after a few hundred metres you reach the Cathedral of Valencia (picture below), the most important and most visited building of the city. The construction of the church began in the 13th century and was only finished about 200 years ago. Inside there are pictures of very famous Spanish artists. This is one of the reasons why the cathedral costs admission (4 Euro), which is rather unusual for Spanish churches. 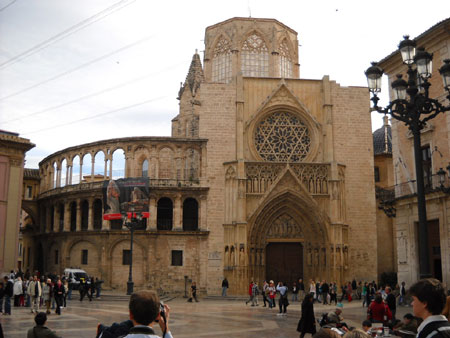 One of the largest and most interesting market halls in Spain is not far away. It sells mainly meat, fish and vegetables. Behind the market there is an excellent street stall where the famous Paella Valencia is sold in the morning – as good and cheap (3 Euro per portion in 2011) as hardly anywhere else.

There are many other buildings worth seeing in Valencia. The train station (Estación del Norte) is one of the most beautiful in Europe.

The huge bullring (Plaza del Toros) with about 17,000 spectator seats is located directly next to the railway station. Unfortunately, the arena cannot be visited from the inside.

All in all, one should take a whole day for the city centre of Valencia. Also, one should absolutely go for a walk in the small alleys of the old town away from the tourist streams. There, one finds many small restaurants where one can have a cheap meal. A 3-course menu including the famous paella of Valencia often costs barely more than 10 euros including drinks.

Also outside the city Valencia has a lot to offer. The district Ciudad de las Artes y de las Ciencias (city of art and science), newly built in the last 10 years, accommodates among other things the biggest aquarium in Europe, a gigantic new opera, a technology museum, a big planetarium, great parks and a very famous 3D cinema. Among the at least 30 museums in Valencia, the Museum of Modern Art (Institut Valencia d Art Modern) and the Bullfighting Museum (Museo Taurino) are world famous.

If you have only 1 or 2 days, you can visit Valencia with the bus Hot-On/Hop-Off during a city tour. Many important sights in and around Valencia are visited. You can get off where you like and continue with the next bus. For the sightseeing buses there are tickets for 1 day (24 hours) or 2 days (48 hours).  You can book the bus tours here in advance on the Internet.

A romantic carriage ride through the city centre costs much more. Horses and coachmen wait for passengers between the town hall and the cathedral.

There are now at least 10 hostels and youth hostels in Valencia. Very popular is the Center Valencia Youth Hostel (youth hostel, Valencia center). There are dormitories as well as double rooms with private bathrooms. The location of the accommodation in the city centre is especially great. The Center Valencia Hostel is a relatively large hostel with over 30 rooms.

As a cheap, central pension in Valencia we recommend the Pension Lotelito. Small double rooms with bath and WC often cost considerably less than 40 Euro out of season. The Lotelito Pension in Valencia is especially praised for its location and the friendly and helpful staff.

A larger hotel with about 80 rooms in the old town is the 3-star Hotel Catalonia Excelsior. In winter a double room can cost less than 60 Euro. Breakfast costs extra.

These are just a few examples of recommended accommodation in downtown Valencia. A large overview with over 500 accommodations can be found on Booking.com including holiday homes and apartments.

Arrival and getting around Valencia

Many visitors arrive in Valencia by train. If you arrive by car, you should consider if you prefer to leave your car outside and take the suburban train or subway to the city centre. Traffic in Valencia is still chaotic. Even in the city centre there are still too many busy streets, which annoys many tourists. Those who visit Valencia from the Costa Blanca can already leave their car in Gandia. From here, one gets quickly and cheaply (2011 4,40 Euro simply) by train to the centre.

The subway of Valencia (Metro Valencia) has been extended with enormous speed in recent years. Currently (2015) there are nine lines. The connection to the airport has been in operation since 2007. The S-Bahn from Valencia travels further afield (up to 80 km outside). Of course, there are also a large number of city buses. Tourists come with the modern and cheap metro to many sights of Valencia.

Parking in Valencia and reserve a parking space

If you are travelling in Spain by car or rental car, you know the problem. Parking spaces are hard to find in big cities and expensive. Parking garages and public parking lots are often full. On this great website you can reserve parking in Valencia