The Spanish tourism planners had a clever idea a few decades ago: they divided the coast of the mainland of Spain into sections and gave some of them melodious names that no copywriter could better invent. The names should make you want to go on holiday. This name for the coasts has now become generally accepted and is used for the most part even by the locals.

In the following a list of the coasts of Spain with short description. In recent times, some of the coasts have been further divided, probably to create new, exciting sounding, tourist areas. The list here refers to the old, longer coastal names.

Mediterranean coasts in Spain from north to south

Costa Brava („Wild Coast“): Directly behind the French border the Costa Brava begins. A large part of the Costa Brava is characterized by steep cliffs and rocks. Partly, the Costa Brava is so steep that one cannot even build a road along the shore. You have to drive up hundreds of meters and down again on the other side if you want to go from one coastal village to the next. 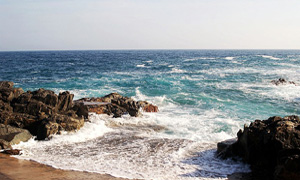 In between there are also bays with large villages with long beaches and a lot of tourism. The beaches around Lloret de Mar, the main holiday resort on the Costa Brava, are well known. In summer it is usually very warm here. In winter, the Costa Brava has a cooler and partly rainy coastal climate. But also in summer the climate is often bearable due to the wind.

Costa Daurada („Gold Coast“) : The Costa Brava ends north of Barcelona, south of the metropolis the Costa Daurada begins. Capital of the region is Tarragona. Although the area has many great beaches with golden sand (hence the name), the Costa Daurada is not as crowded as the Costa Blanca. However, a lot has been invested in tourism here – for example, a large amusement park (Port Aventura) was built near Tarragona.

Costa del Azahar: Next comes the coast with perhaps the most beautiful name („Orange Blossom Coast“). Also here one puts oneself into the stuff to get more tourists. Thus in the last years a second big international airport was built (in the north, the other is the airport of Valencia). In general, the whole area up to Denia (almost 100 km south of Valencia) is counted to the Costa del Azahar. The hinterland is mountainous and full of orange trees. South of Valencia the landscape is flat. In the wetlands rice is cultivated. Capital of course is the city of Valencia. Some places in the north like Peniscola live meanwhile quite well from the vacationers from the inland and abroad.

Costa Blanca: The name means „white coast“ and does not come from the magnificent beaches with bright sand, but from the snow-white houses in many villages on the Costa Blanca. Benidorm is the tourist resort with the most hotel beds in Europe. 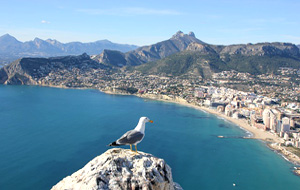 It’s absolute mass tourism. In other places hundreds of thousands of foreigners (mostly from Germany and Great Britain) have settled forever. The atmosphere here is international and little Spanish. Plus points are the picturesque, beautiful places like Altea and the good beaches. The climate here is almost subtropical – even in winter day temperatures of 20 degrees are not unusual.

Costa Calida („Hot Coast“): Now we are in southern Spain. This coastal section is considered to be particularly hot and dry. Even in winter the sun shines here on most days. The city Cartagena is worth seeing, but also some cities in the interior like Elche are worth a visit. Popular for bathing is the shore of the Mar Menor, whose coasts are well protected from waves by a long narrow strip of land that protrudes 25 km into the sea.

Costa de Almeria: This coast of Spain does not carry an artificial name. It stretches along the entire province of Almeria. There are great beaches and areas with more and less tourism. The most famous resort on the Costa del Almeria is Roquetas de Mar.

Costa Tropical: („Tropical Coast“). The name is somewhat exaggerated, the climate here is subtropical at best. Nevertheless, one can also go to the beach here in winter on many days and even bathe in the sea. Who wants to reach with the car from the Costa Tropical in 1-2 hours the ski areas of the Sierra Nevada. The most important city for the tourism at the Costa Tropical is Nerja and of course the big city Malaga.

Costa del Sol: („Sun Coast“). The coast of Spain at which, as at the Costa Blanca, mass tourism prevails. Everything is offered, from an extremely cheap package holiday to a 5-star luxury golf holiday. The climate is warm and dry, it gives Costa del Sol less than 50 days a year without sunshine! The Costa del Sol is located between Malaga and Gibraltar.

The city of Marbella is one of the most famous tourist resorts in Spain, the most beautiful city in the hinterland is Ronda.

Costa del Luz („Coast of Light“): Now the Atlantic is reached, there is ebb and flow. The Costa del Luz is famous for its nature and wetlands, especially in the famous Coto de Donana National Park. The coast stretches from Gibraltar to the Portuguese border and is the only southern Spanish Atlantic coast. There are holiday resorts west of the capital Huelva, which are predominantly visited by Spaniards. Perhaps the oldest city in Europe Cadiz is on this coast.

The north coast and the short northwest coast of Spain is often divided into four sections. From east to west these are: the Costa Vasca („Basque Coast“), the Costa Verde („Green Coast“), and in the west the Rias Altas (about „upper estuaries“) and the Rias Baixas (about „lower estuaries“). In the whole region rains is much more than on the Mediterranean coast. The landscape in green. Many still live from agriculture (like wine growing) and modern industry. For the traveller who wants to discover and get to know Spain, a trip along the north coast is ideal. As an individual tourist you will find here the real Spain with many interesting, culturally and scenically very different regions. Of course, there are also holidaymakers at the Spanish north coast, but there is no mass tourism like at the Mediterranean.