Anyone making a round trip through the south of Spain should plan at least one day in Gibraltar. Gibraltar does not belong to Spain, but to Great Britain. It is mainly spoken in English, the culture is British, the pound is the preferred currency, but in most shops you can also pay in Euros. Gibraltar has an area of just 6.5 km² and almost 30,000 inhabitants. The British overseas territory lies on a longish peninsula, the land border with Spain is only 1000 metres long. As Gibraltar is an EU-area, but not a member of the European internal market, there are real border controls. In Gibraltar you can buy quite cheap cigarettes and alcohol, which is the main reason for the trip for many visitors of Gibraltar. The permitted export quantity is strictly controlled. 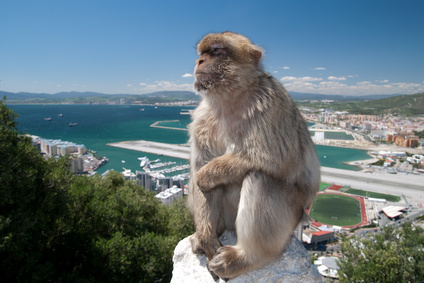 The border with Spain is in the north of Gibraltar. Shortly after the border, one passes the runway of the airport, which is simply built across the road for space reasons. The western part of the peninsula is flat, here are most of the houses. The eastern part of Gibraltar consists of an over 400 meter high rock called Upper Rock. This limestone rock and the monkeys living on the rock are probably the most important sight of Gibraltar.

The Upper Rock can also be avoided on a road on the east coast. On the east coast of Gibraltar, there are few people living, as the rock rises steeply out of the sea and therefore there is hardly any space available. There are only 2-3 smaller settlements. At the southern end of the peninsula Gibraltar there are considerably more houses. Here is the famous lighthouse near the Europe Point. Nowhere else Africa and Europe are so close – the distance Gibraltar-Morocco is only about 28 km. In certain weather conditions you can clearly see the African coast from the Upper Rock.

Our tip: tours through Gibraltar and / or watching dolphins

As it is not easy to get around Gibraltar by public transport or rental car, many tourists book a tour. Many do not only visit Gibraltar, but also make a tour including dolphin watching. Not only all ships, but also all animals in the sea that want to go from the Atlantic to the Mediterranean have to pass through the Strait of Gibraltar. It is a great place for dolphin watching.

If you come to Gibraltar by land, crossing the runway through a 4-lane road is the first attraction. This is unique in the world. In the city itself there are not too many sightseeings, many go to one of the British pubs. Here you can get original British food like fish and chips or steak and kidney pie. In the many shops of the Main Street, mainly duty free cigarettes and liquor bottles are sold. Caution: The Spaniards often check very closely on their return journey. 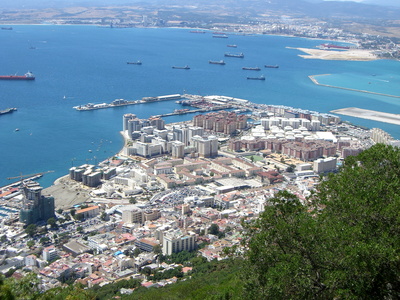 The most important sight in Gibraltar is the limestone rock Upper Rock. In Europe the Upper Rock of Gibraltar is the only place where monkeys live in freedom. There are several hundred specimens of the species Barbary monkeys (Latin Macaca sylvanus). Most of the approximately 10 kilo heavy and 80 cm big animals are anything but shy. Almost every tourist takes photos of and with the monkeys. An old legend says that the British leave Gibraltar when the monkeys are gone.

The Upper Rock can be reached with a cable car, but there are also footpaths to the top. The view from above is magnificent. The houses and streets of Gibraltar look like toys from above, Africa is clearly visible on the horizon. The rock is perforated by caves. Some of these caves are artificial. Since there is not enough space in Gibraltar, one has gained land with the rock material in the sea. However, other caves are very old and of natural origin. Known is the Gorham Cave, one of the most important sights of Gibraltar. Here researchers find world-famous finds from the late Neanderthal period.

In the museum of Gibraltar down in the city some of these finds from the Stone Age and other things from later epochs are exhibited. A visit to the Gibraltar Museum is worthwhile because the entrance fee is only 2 pounds (about 2.50 euros). Opening hours: Mo-Fr 10 – 18 o’clock, Sa 10 – 14 o’clock, Sun and holiday not open.

For many tourists the lighthouse and the neighbouring southernmost point of Gibraltar (Europe point) is also a sight. Actually it is nothing special. 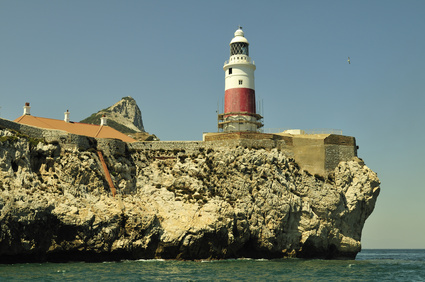 In Gibraltar the hotels are usually a little more expensive than in the surrounding towns in Spain. Right behind the border is Spain, where you will find La Linea de la Conception, which can be easily reached by car and public bus. Here are some cheap hotels, partly less than one kilometre away from the border, that can be booked in advance on the internet. Many hotels directly in Gibraltar can be found at Booking.com.

Directions and getting around Gibraltar

There are three ways to get to Gibraltar: By land, by sea or by air.

The best way to get to Gibraltar by land or public transport is to take a bus to La Linea. This is the Spanish city on the other side of the border. From the bus station in La Linea it is only about 200 metres to the border.

There are 5 city bus lines in Gibraltar. You can get practically anywhere. Two of the lines go to the Spanish border. But you can also walk the good kilometre from the border to the centre of Gibraltar.

There are many ferries from Gibraltar to Morocco. For many years, Gibraltar has been one of the most important ferry ports for connections across the Strait of Gibraltar.

There are flights to Gibraltar, but by far not as many as to the big Spanish tourist airports.