Cartagena has about 200,000 inhabitants and is located in the southeast of Spain by the sea. The port of Cartagena is one of the largest in Spain. For the tourist Cartagena is interesting because of the many historical buildings and the location on the Costa Calida (hot coast). Even in January day temperatures of over 20 degrees are not rare here. 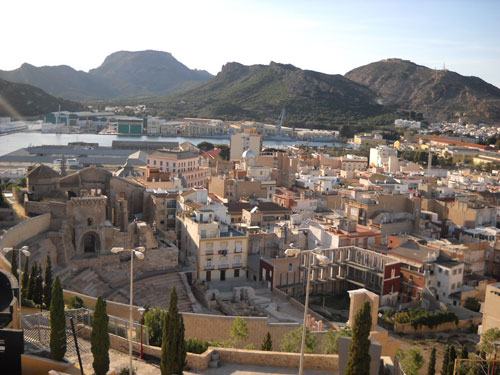 Cartagena was the capital of the Carthaginians in Europe. When the Romans conquered the city around 200 B.C., they called the city „New Carthage“, from which its present name derives. In the Middle Ages, Cartageno, like most of Spain, was Arabic for many centuries. The city has many sights, but the excavations in Cartagena are far from finished. Only in the last few years, for example, the central and the current cityscape of Cartagena’s formative Roman theater was excavated.

If you arrive by bus or train, you can walk to the historic city centre in about 20 minutes. First you should visit the central castle „Castillo de la Concepcion“. There is not too much preserved of the castle, but one has a magnificent panorama from above to Cartagena (picture above), the big harbour, the Roman theatre (picture below) and the surrounding area.  The Roman theatre directly under the castle can be entered since 2008. 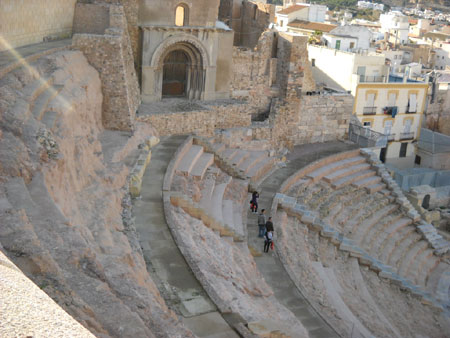 By visiting the castle grounds is free if you go up on foot (about 10 minutes). If you want to use the new elevator, you pay one Euro. Also nice are the peacocks, which run around freely in the castle and are fed by the tourists. 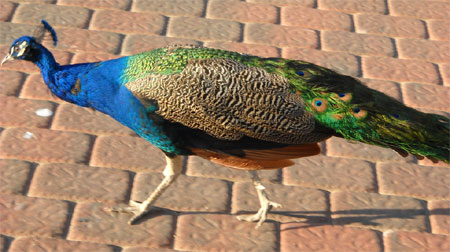 Down at the port of Cartagena, the main attraction is an exhibited submarine from the 19th century. It is probably the most photographed object in the port city. One of the most beautiful buildings in Cartagena is the town hall (picture below) and the venerable Gran Hotel of Cartagena. 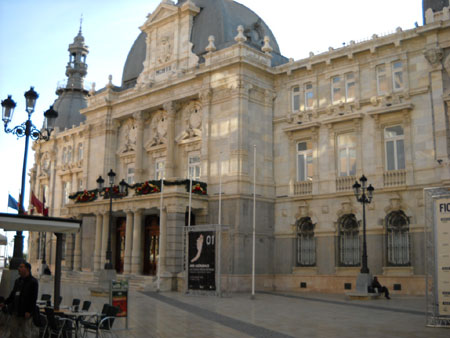 In the city centre, there is a pedestrian precinct that leaves from the town hall square on the shore, in which many inhabitants prefer to sit in the cosy street cafés rather than go shopping. On the shore there is a large square and beautiful green areas. Especially in the city centre, Cartagena makes a very prosperous impression. 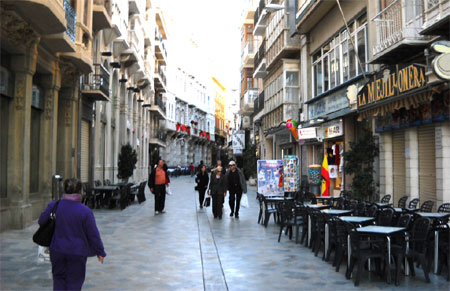 Large parts of the city are dominated by the huge commercial port. More cargo is handled here than in any other southern Mediterranean port in Spain. Before tourism, the port is the most important economic sector in the second largest city in the province of Murcia.

Of course, in a tourist city like Cartagena there are many hotels and guesthouses. But especially in summer it is not easy to find a simple, cheap room. In the high season, one should definitely book in advance. The hotel Los Habaneros is quite good and comparatively cheap. Good rooms cost in the summer about 50 to 60 euros. It hardly gets cheaper in Cartagena.

There’s only one railroad to the city. All trains go to Murcia and from here in different directions (Alicante, Valencia or Madrid). There are more than 10 trains a day to Murcia, the regional trains cost 5.45 euros at the beginning of 2015, the faster trains a little more.

There are many more connections from the bus station. The bus line Cartagena – Torrevieja – Santa Pola – Alicante is often used by holidaymakers. The only way to the south is by bus (e.g. Almeria, Granada with Alhambra or Malaga), there is no railway line along the coast. The Mediterranean motorway AP-7 passes directly by Cartagena (just take the exit Cartagena).