A narrow-gauge railway runs along the northern part of the Costa Blanca from Alicante via Benidorm to Denia. The train is especially popular with tourists, as it is a great route, the fares are very cheap and the train connects all the important holiday resorts of the region. 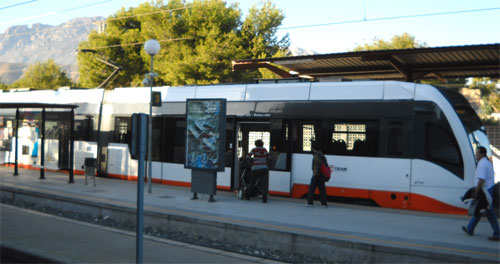 The train is given many names. Some call it the narrow-gauge railway, others the tram, tram, railway or Bimmelbahn, others simply the Denia train. Recently the line has been extended and in the distant future it will be at least until Benidorm more an S-Bahn than a tram. In Alicante, the train now runs underground and becomes a subway for a few kilometres.

The train stops very often, similar to a tram, which is a big advantage especially for holidaymakers. The journey time naturally extends this. One travels from Alicante to Denia for about 2,5 hours, also the name slow train is not completely inappropriate. Tickets are available in larger stations at the ticket counter, otherwise in a vending machine in the train (keep change ready). Those who are caught without a ticket pay a fine. The operation of the vending machines is quite simple.

The trains are operated by the local company FGV and have nothing to do with the Spanish Railway (RENFE) (no information and no tickets at the main station). Alicante Central Station and the Narrow Gauge Railway Station (Alacant Mercado) are about 1.5 km apart. However, this will change after the extension of the narrow-gauge railway (under construction), then the tram will depart directly below the main station (as of 2011).

Currently the line is divided into two parts, which are used by different trains. The transfer station is Benidorm.

Guide to the Costa Blanca

Benidorm – Alicante: This train resembles a tram. The train starts and ends at the underground station „Mercado“ (market) in the centre of the city of Alicante. The fare is very reasonable. A return ticket for the whole distance to the holiday resort Benidorm costs 5,60 € (Nov. 2009). There are trains only during the day until about 22 o’clock. In both directions there are two trains per hour.

Benidorm – Denia: Similar trains are now used on this line. The narrow-gauge railway runs here only once an hour. The train stops in the big holiday resorts of the Costa Blanca like Altea or Calpe. Also here tickets are very cheap. Benidorm to Denia there and back also costs 5,60 Euro. Short distances cost just 1,15 € simply or 2 € there and back.

Attention: In the stops in italics you have to change to line 3, which uses the same line, because the train from Benidorm passes through. The best place to change is El Campello.

Most railway stations are close to the city centre. In Benidorm the station is unfortunately about 2 km from the centre.