The capital of Spain is, as in almost all European countries, by far the largest city in the country. Madrid is also the seat of the Spanish king. The royal palace is one of the most popular sightseeings in Madrid next to the city centre and the world-famous art museum Prado. The city has almost everything to offer except beaches: the capital of Spain is, in contrast to many other big cities in Spain, inland. As a result, the climate in Madrid is continental. The summers are hot, the winters for Spain rather cold. In January and February the temperatures in Madrid often drop below zero at night, while at the same time it is over 10 degrees warmer on the Mediterranean coast. In Madrid it rarely rains, especially in summer. 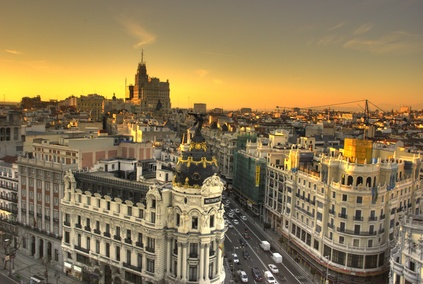 The Puerta del Sol square is considered to be the centre of the city of Madrid and the whole country. Here is kilometer zero of many important Spanish roads. There are several famous monuments on the square. It is traditionally an important place for parades and demonstrations. Perhaps even more important is the Plaza Mayor, not far from the Puerto del Sol square. It is by far the largest square in the city (more than one hectare!), the famous Madrid Christmas market takes place here every year. 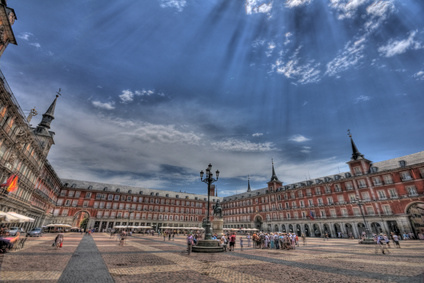 Probably the most impressive sight of Madrid is the Royal Palace (Palacio Real). It is the seat of the King of Spain. In the huge royal palace there are approximately 2500 rooms. The Throne Room and the Hall of Mirrors are the most famous rooms. The building in the style of the baroque dates mainly from the 18th century. Also the gardens, parks and courtyards around the palace are a top sight. Opening hours of the Royal Palace Madrid: approximately daily from 9 to 18 o’clock, in winter and on Sundays the castle closes for visitors somewhat earlier. The Royal Palace is in the centre of Madrid. 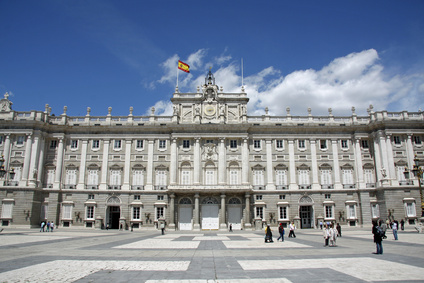 The Prado Museum (Museo del Prado) is for art lovers the most important sight in Madrid and Spain. It is the most visited museum in Spain with 3 million visitors annually. The queues at the cash desks are often extreme (see yellow box). The paintings in the Prado are sorted according to the origin of the artists. The works of Spanish, French and Flemish painters are world famous. Paintings by Rubens, Rembrandt, Goya, Dürer, El Greco are among the approximately 2000 top paintings in the Prado. Opening hours Prado Madrid: Every day of the year (except Mondays and some holidays) from 9 am to 8 pm. The entrance fee for adults is about 16 euros (in 2016).

The Museo Reina Sofia is the Museum of Modern Art in Madrid. The Prado exhibits paintings until about the year 1850, the Reina Sofia the newer works. The wax museum (Museo de Cera) is another popular museum in Madrid. Similar to the Madame Tussauds in London, here prominent people are reproduced in life size (almost 500 people). Further most important museums in Madrid are for example the Bullfighting Museum and the Spanish Archaeological National Museum.

Of course there are also churches among the sightseeings of Madrid. The „Santa Maria la Real de La Almudena“ is the cathedral of Madrid. The construction of the church took several centuries and was only finished in 1993. The Almudena Cathedral is a building in the style of classicism.

If you are travelling in Spain by car or rental car, you know the problem. Parking spaces are very difficult to find and expensive in big cities like Madrid. Parking garages and public parking lots are often full. On this great website you can reserve parking in Madrid, so you know in advance where to park and the price for the parking space.

Rail: After France, Spain has the fastest train network in Europe, at least as far as new lines are concerned. So far, almost all of these have been star-shaped towards Madrid. This means that it is now possible to reach Spanish cities far away from Madrid by train in just a few hours. For example, a trip to Barcelona only takes 2 hours and 45 minutes, but unfortunately it usually costs more than 100 euros without advance booking. Tickets are cheaper on the internet than at the counter. Those who book a few days in advance can often travel to Barcelona with the super fast AVE for less than 50 euros. More super-fast new tracks go from Madrid to Seville, Valencia, Alicante, Valladolid and Malaga. Many more routes are planned, but the expansion could be delayed due to the economic crisis. The connection to the French network north of Barcelona is now completed (Lyon, Paris, Marseille etc.). There is a direct night train from Madrid to Lisbon, which can cost less than 50 euros if booked in advance.

Around Madrid there are three airports, of which Barajas is the most important „Aeropuerto“. It is about 12 km north of downtown Madrid. A subway leads to the big airport, but from the sightseeings in the centre, one unfortunately has to change easily and inconveniently.

Madrid has one of the largest subway networks in the world. The name of the Madrid subway is simply Metro. The network is over 300 km long, consists of 13 lines and has over 300 stations. Since 2007 there are trams in Madrid again. The tram network is growing rapidly. Hardly anywhere else in Europe has so much been invested in transport infrastructure as in Madrid.