Alicante (in Catalan Alacant) is the largest and most important city on the Costa Blanca and something like its unofficial capital. Alicante itself has only a little more than 300,000 inhabitants, but the city is the metropolis of the populous province Alicante with approximately 1.8 million inhabitants. For the visitor, Alicante has some interesting sightseeings and a perfect city beach to offer. Most tourists are day-trippers who spend their holidays in the huge holiday resorts of the Costa Blanca. In spite of the many visitors, the centre is not very touristy and still very authentic Spanish. 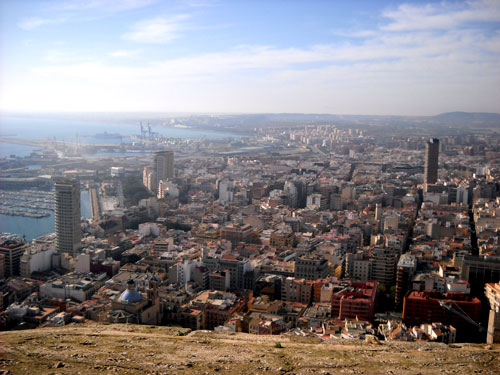 In order to get an overview over Alicante, it is best to go to the big mountain right in the city centre on which the Castello de Santa Barbara is located. The big castle, the most important sight of Alicante, was already built by the Moors more than 1000 years ago, but later in the 7th century it was enlarged considerably. In the Franco period, the castle with its thick walls served as a prison for a time. From up here (almost 200 meters high) you have a great view over Alicante (see picture above), the marina (see picture below) and the sea. The best is: you don’t even have to walk up there. You walk from the city centre into a 200 meter long tunnel. At the end of the tunnel there is an elevator that takes the visitors to the top in less than a minute. The Castillo de Santa Barbara does not cost any entrance fee. The ride with the 3 metres per second fast lift costs 2,40€ in summer, in winter the ride is often free.

Alicante has a great city beach. The wide Playa de Postiguet starts right in the center and is one kilometer long. In summer, the beach is quite crowded, much more than in the picture above in November. 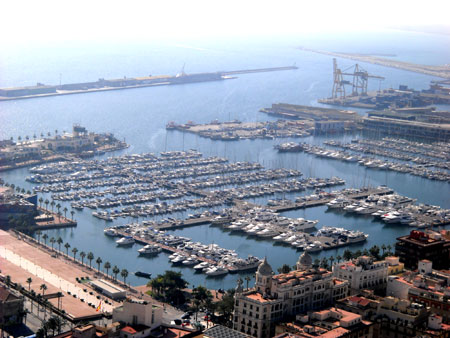 In the large marina of Alicante, directly opposite the city centre, there are yachts with a total value of several hundred million Euros. Yacht fans like to come to Alicante to take pictures of the yachts, as here, one gets quite close to the dream ships. In Alicante, one finds a lot of boats of the upper class. 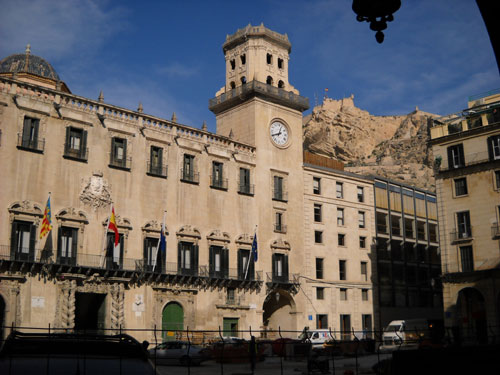 The old town of Alicante still looks very Spanish despite the many tourists. The prices in the restaurants, tapas bars and pubs are still low. The main boulevard (called Rambla in Spain) is the Explanada de Espana, which runs parallel to the port of Alicante. Unfortunately, this street is meanwhile characterized by international fast food chains and the like. Immediately behind it in the old town there is the chic city hall (see picture above) and the famous cathedral San Nicolas de Bari. 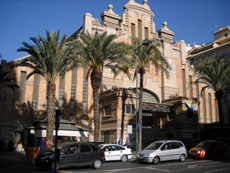 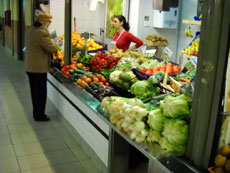 Every fan of the Spanish way of life should definitely go to the large central market hall (Mercado) of Alicante. Only food is offered here. Especially the fish section in the cellar and the meat section on the ground floor are popular with tourists. The selection of fruits and vegetables is large, the quality is high and the prices low.

The city centre of Alicante, including all the sights described above, can be easily explored on foot and with the lift described above. Nothing is more than one kilometre apart.

Travelling from the resorts on the Costa Blanca, the tram (narrow-gauge railway) of Benidorm, Altea, Calpe and Denia is ideal. The fares are very cheap (from Benidorm there and back 5,60€ in 2009). The route is currently under construction. The final stop is recently in Alicante at the market hall (Mercado) and no longer at the sea. In a few years the train will continue underground to the main station. The journey takes quite a long time, from Denia one has to reckon with more than 2 hours, from Benidorm about 1 hour and 10 minutes. After the extension of the route, the journey time should be further shortened. Further tram and underground lines in Alicante are currently under construction or planned. A train is also to be built to the airport of Alicante. A new high-speed line to Madrid has been in operation for some years now. The modern AVE trains need only 2.5 hours between Alicante and Madrid.