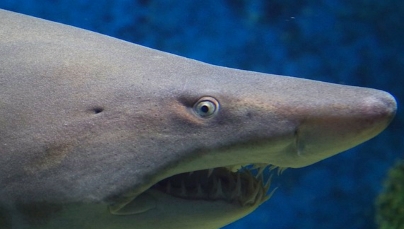 Accidents with sharks are however very rare worldwide, in Europe and Spain they are still rarer. The chance to have an accident with a rental car while on holiday, to be damaged by an earthquake or to die of a heart attack is probably many times more likely than to be attacked by a shark. Almost every shark accident in Australia or the USA makes headlines until Europe. A normal traffic accident with an injured or dead is, however, highly worth a report in the local press of a small town. That is why many people overestimate the danger posed by a shark.

Nor do we want to say that dangerous shark attacks are impossible in Spain. They are only comparatively very rare. According to various statistics, there are about 20 to 100 shark attacks on people per year in the world. Only a small part (in some statistics 5 to 20%) is fatal. Most of these attacks are documented in the USA and Australia. South Africa and Brazil follow. In Europe there are no or very few shark attacks. This is probably because in Europe most dangerous shark species are rare. In the following now some examples of shark species that occur in Spain. The focus is on the dangerous sharks, but also some other sharks in Atlantic and Mediterranean around Spain are briefly introduced. Since the Canaries lie much further south, other shark species, such as tropical species, occur there. This article refers more to sharks around the Spanish mainland and the Balearic Islands such as Mallorca or Ibiza.

Examples of sharks around Spain

Great White Shark: Since the feature film „The Great White Shark“ directed by Steven Spielberg in the 70s, this shark species is considered by many people to be the most dangerous fish species. The famous white shark also occurs around Spain, it has already been seen in the Mediterranean. Every year there are several attacks by a white shark, some of which are fatal. These are often in Asia (like Japan) or at the warm Pacific coast of the USA (southern California). In Europe it comes according to our sources rarely or not at all to attacks of this shark species. This could be due to the fact that the great white shark is rare in Europe.

Tiger shark: A shark very dangerous for humans. Although it is not exactly frequent worldwide, it comes every year to fatal attacks. It lives, however, almost only in the tropics. The tiger shark rarely comes to the coasts off Spain, but has already been seen. Through climate change, the tiger shark could become a problem in southern Europe in the future. The number of sightings increases. Also in the proximity of Mallorca already tiger sharks were sighted.

Bull shark: Perhaps the most dangerous shark in the world. The bull shark was often seen around Spain in the Atlantic Ocean around the Canary Islands. A report of a bull shark around the mainland of Spain we have not found.

Porbeagle: This fish is 3 meters long and has already attacked people in Europe. The porbeagle occurs on almost all coasts of Europe, from cold Iceland to the eastern Mediterranean. 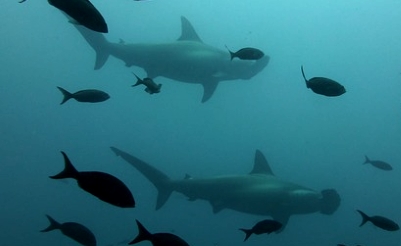 Oceanic whitetip shark: Very dangerous shark that occurs mainly in the Atlantic off Spain and Portugal. Deep-sea sharks are rarely found in smaller seas such as the Mediterranean. The white tip sea shark can grow up to 4 meters long, but the animals are usually about 2 meters tall. It can smell very good, blood from small wounds should have cost already some swimmers the life. A white tip sea shark can follow traces of blood in the sea water from a few kilometres away. The animals can be found all over the world in warmer oceans.

Basking shark: The largest shark around Spain, the basking sharks are up to 10 meters long. However, they are not predatory fish and have hardly any teeth. They filter the water for plankton.

Dusky shark: Up to four meters long animal that has already attacked humans. However, they are more common in tropical oceans than around Spain. However, they have also been sighted as far as northern Italy and France. Black sharks also occur on the Atlantic coast of Spain and Portugal.

Silky shark: The silk shark was only found in recent years in the Mediterranean. Probably the 2-3 meters long fish immigrated to the Mediterranean only in the last decades. It is considered to be potentially dangerous for humans due to its size.

Copper sharki: The species probably occurs more frequently in the south of Spain than in the north. In Australia, Copper sharks have killed at least two people in recent years (a swimmer and a surfer).

Thresher shark: Very large sharks up to 8 meters long. The fox shark is rarely supposed to attack humans, but smaller boats have already been knocked over by it.

Nursehound : Rather rare species around Spain. It is 2-3 meters long and can be dangerous for humans. However, it lives mostly in big depth. Other names: large-spotted dogfish or bull huss

Large-spotted catshark: This shark is common in the Mediterranean from Israel to Spain. The fish become about 1.5 meters long. Attacks on swimmers are rare. However, these sharks can attack fishermen, who want to catch them intentionally or by mistake, violently.

Small-spotted cat-shark: Clearly smaller type (approximately 70 centimeters long, weight approximately 1 kg). They can be found in the Mediterranean Sea, the North Sea and the Baltic Sea. Food is especially crabs.

This is only a part of the shark species around Spain, there are certainly much more species, even for humans dangerous sharks. Worldwide there are over 550 shark species.