The city of Torremolinos is one of the biggest tourist resorts on the Costa del Sol in the south of Spain. Originally Torremolinos was a simple fishing village with 4000 inhabitants. In the 50’s the first tourists came to Torremolinos. Today the city has about 70.000 inhabitants and belongs to the very big tourist places in Europe. In the meantime, the place has grown together with two further mega-tourist places, Benalmadena and Fuengirola. Together it is one of the largest tourist regions in the world.

Torremolinos is located directly south of the city of Malaga. Between the two cities is the airport of Malaga. Torremolinos is connected with Malaga, with the airport and with the big tourist cities further south by a modern S-Bahn every 20 minutes. The majority of holidaymakers in Torremolinos come from Great Britain and the Netherlands. Germans also come here, but they are clearly in the minority.

Although the city centre is only a few hundred metres from the sea, it is about 50 to 60 metres above sea level. Below the beach there is a beautiful pedestrian promenade with many shops and restaurants. The wide, long beach looks very neat and clean. In summer tens of thousands of tourists sunbathe here every day. 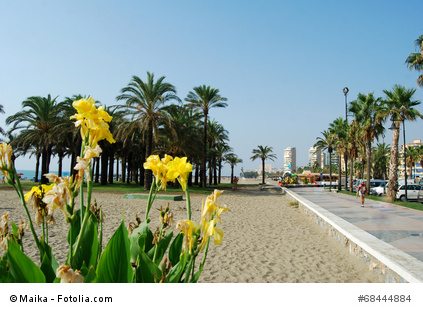 The many big hotels of Torremolinos seem a little boring for the most part. Most of them are big concrete blocks without any character. Perhaps the most beautiful area of Torremolinos is the old quarter Carihuela just a few meters behind the beach promenade. But also these old alleys have been completely conquered by tourism. In almost every house there is a guesthouse, a souvenir shop or a restaurant. Nevertheless, the area has much more flair than the rest of the city. In the last years, the city administration has tried to make Torremolinos more attractive. Some parks and the Botanical Garden (only 1 Euro entrance fee) have been created. Along the sea, many palm trees were planted that give shade to the holidaymakers during the many hot days at the Costa del Sol.

In the city center is the station of the local train and a larger pedestrian zone. There are also many restaurants and pubs. A German meeting point in the evening is the pub „Claudia´s“ almost directly at the main square Plaza de la Nogalera, on which also the underground station is. Also international chains like Burger King, Irish Pubs and similar are in direct proximity. You can feel here that Torremolinos are becoming more and more a holiday resort for tourists with rather low purchasing power. Big signs with special offers dominate the picture. In some pubs, a small beer is already available for one euro (as of the beginning of 2015). Otherwise there are in Torremolinos many night clubs, discotheques and some brothels. The city has one of the biggest gay and lesbian scenes in liberal Spain.

Along the beach of Torremolinos

If you go down one of the steep roads from the centre to the Mediterranean, you reach the beach after less than one kilometre. Here, along the promenade, there are several hundred restaurants. They are mostly Spanish restaurants with quite good cuisine and reasonable prices. There are also many fast food restaurants. Not a few foreigners from England, Holland and Germany try their luck here as independent restaurateurs. However, the curry sausages in Germany tasted better than in Torremolinos. The prices are favourable due to the strong competition, this is especially true if you order the special offers which are written in capital letters. Such a bargain can be a paella for 4 Euro or a small beer for 1 Euro. The promenade goes as far as Benalmadena. Only because of the place name sign on the pedestrian zones one notices that one has reached the other place. Otherwise, Torremolinos and Benalmadena are completely assembled.

The train line runs at the top of the city centre. Thus, those who arrive by train and want to get to the beach have to walk down the mountain for approximately 15 minutes. The modern trains run every 20 minutes to Malaga, to the airport and in the other direction to Benalmadena and Fuengirola. In Malaga and Fuengirola the train stations are very central, in Benalmadena the station is far away from the sea. 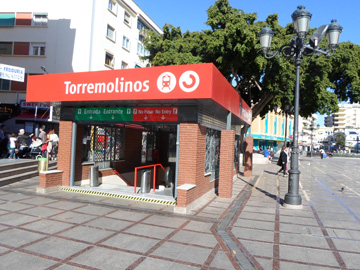 The fares are very reasonable, a single trip from Torremolinos costs a maximum of 2.05 euros (as of early 2015). Even cheaper are tens of tickets, then you only pay about 1.35 euros per trip. You can also use the tens cards for several people at the same time. The S-Bahn in Spain is called Cercanias. Accordingly, the abbreviation on the information signs is not „S“ as it is here, but „C“. One buys tickets before the trip at the vending machine, which is relatively simple. The vending machines can be operated in English, but not in German. At the station Torremolinos there is, in contrast to almost all other S-Bahn stations of the S-Bahn Malaga, a ticket counter that is mostly occupied.

Many holidaymakers in Torremolinos go on one or more day trips during their holidays. A very popular destination is Gibraltar, about 100 kilometres away. Unfortunately it is not easy to get from Torremolinos to Gibraltar without a car (distance about 100 km). There is no railway along the coast, the few buses are mostly with change. However, there are excursion buses that offer day trips at a reasonable price. We recommend to book such a tour in peace at home in the Internet on a German web page. Here you can find more information and the possibility to book such an excursion to Gibraltar.

The bus station is located at the top of the center not far from the central Plaza del Sol. Buses depart from Torremolinos several times per hour to Malaga and Benalmadena (line 110). Every half hour during the day there is a bus to Benalmadena-Pueblo. Pueblo is the Spanish word for village. It means the old centre of Benalmadena far above the sea. There are also two buses per hour to Fuengirola with many stops along the coast. About 1 to 2 times per hour a bus goes more or less directly to Marbella (travel time a good hour). All buses mentioned so far cost less than two Euros, only the bus to Marbella costs about 5 Euros (prices beginning 2015). Occasionally there are also long-distance buses from Torremolinos to the big cities of southern Spain such as Seville, Cordoba or Granada. Alternatively, you can take the S-Bahn to Malaga and change to trains or buses at the main station (name: Maria Zambrano). Malaga central bus station is right next to the hypermodern new train station. The buses from Torremolinos to Malaga do not stop at the big bus station, but at a smaller station by the sea, not far from the city centre (name: Muelle Heredia).

Tickets Burj Khalifa: The highest house in the world in Dubai

With so many hotels and apartment complexes as in Torremolinos, it’s not easy to recommend anything. Our favourite is the Nina de Oro below, 50 metres from the beach in Carihuela. The apartments with one bedroom and living room cost in winter 30 euros, to summer up to 80 euros (depending on the season). The very nice and helpful owner only speaks Spanish. The furnishing of the kitchen, the WLAN and many other things were excellent in the Nina de Oro during our visit. In the immediate vicinity there are many restaurants, pubs, supermarkets and much more. Many more accommodations in „Torre“ can be booked at Booking.com on the internet (also holiday flats etc.):