The Basilica Sagrada Familia in Barcelona is one of the most visited sights in Spain and one of the most famous churches in the world. It is a very unusual church. Almost all major churches in Europe were completed centuries ago, the modern Sagrada Familia is not even finished yet. The construction of the basilica was started 130 years ago, in about 10 years the basilica could finally be completed. Also the architectural style, designed by the star architect Antoni Gaudi more than 100 years ago, is more than unusual. No sightseeing in Barcelona is visited by so many people, nothing is more admired than the ingenious basilica of Gaudi. 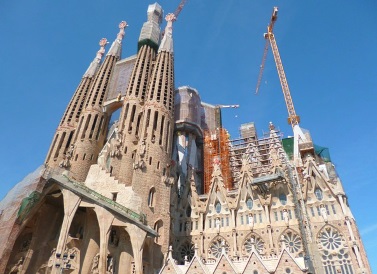 The most important information for visitors in a nutshell

The Basilica is located a few kilometres from the sea to the north of Barcelona city centre and can be easily reached by underground. It is a very large building under construction. Around the church you can see many gigantic construction cranes. The highest tower will be 172 meters high in a few years, then it will be the highest church tower in the world. The interior of the church is largely finished.

Opening hours are every day from 9 am to 6 pm in winter and from 9 am to 8 pm in summer. Queues at ticket counters are often extremely long. The Sagrada Familia is one of the top tourist attractions in Spain, with millions of visitors every season.

If you don’t want to queue very long, you should definitely buy a ticket on the Internet beforehand. You should make sure that it is a ticket without queuing (with quick admission). Getyourguide is a big website for buying tickets:

We recommend that you buy your tickets on the Internet beforehand. It is important to buy tickets online without queuing (also known as fast entry tickets, fast track tickets or skip-the-line tickets).  With these tickets, you don’t have to queue at the cash desk at the church entrance, which often lasts for hours, but can quickly get into the Sagrada Familia. The basilica is one of the biggest sightseeings in Spain, often thousands of visitors want to visit the church almost at the same time. Many visitors of the Sagrada Familia meanwhile have such internet tickets without queuing.

– Of course you can get to the tower in the modern church Sagrada Familia with the lift, there is no long stair climbing. Nevertheless, not all tours are suitable for disabled people (wheelchair users etc.).

– When visiting the Sagrada Familia with quick admission, you should always be at the meeting point 15 minutes in advance for safety reasons. If you arrive too late, you lose your entry ticket.

– Many offers at Getyourguide.de can be cancelled free of charge if something comes in between. The cancellation conditions are included with each offer.

– Most of the information is from January 2019, but some details may be somewhat older.

The modern church is still under construction. As far as we know, there is no organ yet. Therefore, events or services in the basilica are rare. The opening hours for church visitors are correspondingly long:

Nevertheless, the long opening hours are often not enough to cope with the mass of visitors. As a rule, the Sagrada Familia church is closed to visitors on any day of the year. The opening hours are only somewhat reduced on important holidays outside the season (Christmas 25.12 and 26.12, New Year and Epiphany 6.1.), then only until 14 o’clock.

The famous Basilica is located in the north of downtown Barcelona in the district Eixample. The church has its own underground station called „Sagrada Familia“. 2 lines cross here: The metro lines L2 and L5.  Parking in the area is not easy. We recommend the journey to the cathedral with the Metro or other public means of transport.

The cathedral Sagrada Familia on the city map

The church already looks very impressive and unusual from the outside. The reason is the many high towers. At the moment there are 8 (as of the beginning of 2019), but there will be more in the next few years. The huge building in Barcelona reminds many of a sand church that an artist erects at a beach. The architecture looks very playful and is anything but boring.

The interior of the basilica is almost completely finished. Interesting are the many columns that remind many visitors of trees. In the upper part, the stone columns branch like branches on a tree. This was the intention of the brilliant architect Gaudi. He was a very religious man. The pious Antoni Gaudi believed that people in nature, as in the forest, can be very close to God. 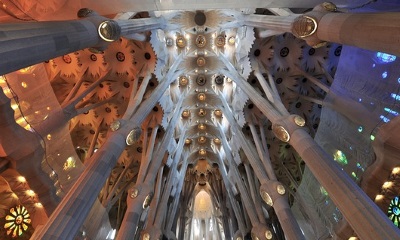 Also many other elements in the great church in Barcelona convince. The interior of the building is quite colourful for a church. In our opinion, the many small decorative elements in the big basilica are especially brilliant by Antoni Gaudi. Almost every visitor has the impression to have never seen something like this before. Many decorations remind of the style of cubism. 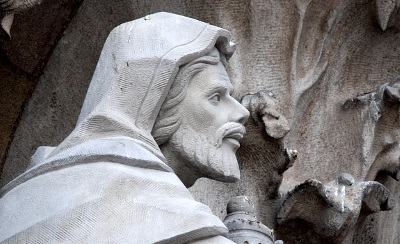 Important attractions in the Sagrada Family Church are also the crypt, the altar and above all the tomb of the great architect Gaudi, who has found his last rest in „his“ church.

Important: You can shoot with the mouse on the film, also upwards and downwards.

When the church opens in 2026 (date may be changed), the Cathedral in Catalonia will have the highest church tower in the world at 172 metres. At present the Ulm Cathedral has the highest tower in the world (161 meters), so the highest church tower of the Sagrada Familia will be about 11 meters higher. The tower at this height was planned over 100 years ago by Antoni Gaudi. The architect wanted to be high up, but still lower than the mountains around Barcelona. These are a maximum of 180 meters high.

After completion, the church in Barcelona will have 18 high towers. We know of no other church in the world with so many towers. Probably another world record. It is probably the most famous church in Spain. 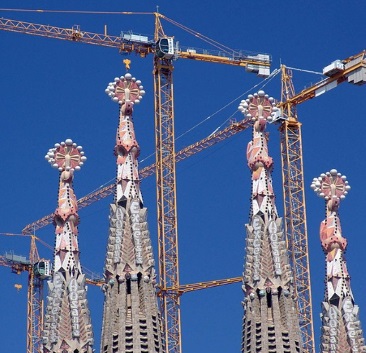 No building known to us was already a UNESCO World Heritage Site before its completion. The title was awarded in 2006.

The Sagrada Familia also became a basilica before its completion. Although the organ and some other parts are still missing inside, Pope Benedict came personally in 2010 and consecrated the cathedral in Barcelona. Since then it has been a „Basilica minor“.

The construction of the Sagrada Familia and Antoni Gaudi

The architect church Sagrada Familia Antoni Gaudí i Cornet was born in 1852 in the south of Catalonia. He was one of the greatest artists of his time worldwide. He was the outstanding artist of the Modernisme style, an idiosyncratic art style in Barcelona and the surrounding area (around 1880 to 1920). Modernism is seen by some experts as Art Nouveau.

The great work of Gaudi, but by far not the only world-famous project, was the Sagrada Familia. Very well known is for example a large house built by Gaudi in Barcelona, the Casa Vicens.

Gaudi knew that he could not complete the great church during his lifetime. Therefore he built many models and finished sketches for posterity. Unfortunately, much of it was destroyed in the Spanish Civil War in the 1930s. Nevertheless, all 7 chief architects continued to build exactly according to Gaudi’s style and specifications, so far still known.

More than half his life Gaudi planned and built at his cathedral Sagrada Familia, Gaudi was mostly very simply dressed. This was his downfall at the age of 73. After a traffic accident, he was hit by a tram in Barcelona, he did not immediately get into a hospital. He was thought to be destitute and poor because of his clothes and could not afford medical treatment. When he was finally admitted to a hospital for the poor, it was already too late. Antoni Gaudi died of his injuries. The scandal shook Barcelona and the whole of Europe. Gaudi was already during his lifetime a very well-known artist with worldwide reputation.

After that, the church Sagrada Familia was built with interruptions until today. In 2010 the interior was finished and the Pope came to consecrate the new „Basilica minor“.

The building could be completed on 10 June 2026, the 100th anniversary of Gaudi’s death. However, many experts consider the date to be too early. It may also take a few years longer.

Name of the church Sagrada Familia

Sagrada Familia means „Holy Family“. The full name of the Catholic Church is: Basílica i Temple Expiatori de la Sagrada Família (Basilica and Temple of Atonement of the Holy Family).