The city of Nerja is the eastern border of the Costa del Sol. A few kilometers further the Costa Tropical begins. Nerja has a warm, almost subtropical climate, similar to the other places on the Costa del Sol. The village has about 25,000 inhabitants and is located directly on the Mediterranean Sea. Nerja is about 40 km east of the metropolis Malaga Spain. For the non-Spanish speaking readers be said that you pronounce the place name „Nercha“. 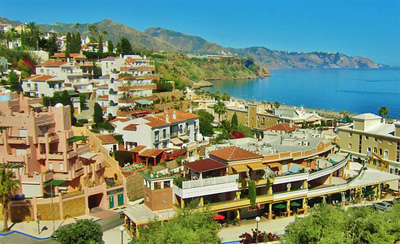 Tourism in Nerja is very different from the other resorts on the Costa del Sol, especially the big resorts on the other side of Malaga. In Nerja it is much quieter, especially many families and elderly people spend their holidays here. The majority of visitors from abroad come from Great Britain, but there are also many Germans and Dutch people coming to the city.

The most beautiful and often photographed place in Nerja is the „Balcon de Europa“. A large square, which was built like a small peninsula on cliffs out into the sea. From here you have a beautiful view of the Mediterranean Sea and the coast in the surrounding area. At the end of the Balcon de Europa a floor below is a restaurant of the upper class. Here you have the sea around you on three sides.

The hotel „Balcon de Europa“ is one of the most famous and best accommodations on the eastern Costa del Sol.

Otherwise, the old part of Nerja with its narrow streets, some of which are pedestrian zones, invites you to take a stroll. One of the advantages of Nerja in general is the very quiet and quiet inner city. Everywhere there are small restaurants and street cafes. The atmosphere in the resort is very pleasant.

Many restaurants with Spanish and Andalusian cuisine can be found in the lower street „Almirante Ferrandiz“. Some restaurants, also with partly German menus, are along the sea south of Calle Malaga, a few hundred meters on foot west of Balcon de Europa. McDonalds, Burger King and similar have surprisingly not yet conquered Nerja. The standard of the food is generally quite high, but unfortunately this also applies to the prices. A few blocks away from the sea you will find some restaurants that offer a good „Menu del Dia“ for less than 10 Euro. Along the shore in the centre, the restaurants for Andalusia are rather expensive.

Many accommodations in Nerja are not high-rise concrete blocks as usual at the Costa del Sol, but nice pensions in the narrow alleys of the city. In Nerja you seem to have understood much better than in most other villages on the south coast of Spain – especially how to integrate tourism into a city without destroying the cityscape.

Buses from and to Nerja from the big city Malaga and Torre de Mar often depart irregularly, about 1-2 times per hour. Some drive directly, others stop „at every milk can“. The travel time to Malaga varies from 40 minutes to 1.5 hours. The tickets are cheap, to Torre del Mar about 1,70 Euro, to Malaga only a little more. A little rarer and more frequent are buses in the other direction to Almunecar at the Costa Tropical. Some buses go in this direction even to Almeria.

The highlight of the sightseeings around Nerja is the famous stalactite cave Cueva de Nerja. During the season, hundreds, sometimes thousands, of holidaymakers visit the caves every day. The several kilometres long cave is absolutely worth seeing, but the gigantic hustle and bustle in summer is perhaps a little exaggerated. But this should be valid for almost all sightseeings at and around the Costa del Sol. For the museum of history in Nerja you should take some time.

The beaches of Nerja are consistently good. Unlike other tourist resorts in the area, Nerja has several small bays with small stalls. 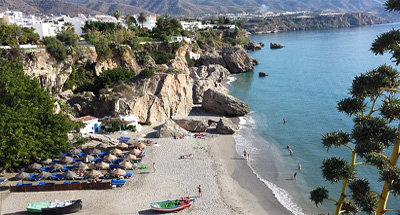 Of course, there are also long and wide sandy beaches with the usual equipment, as it should be different at the coast of the sun.

Also in Dresden there is a balcony of Europe