Ronda is a city in Andalusia very often visited by tourists. It is located high in the mountains, about 1-2 hours from the major tourist cities on the Costa del Sol by rental car or bus. Ronda is with Gibraltar the most popular destination for day trips in the area. In season, hundreds of buses and thousands of tourists come up here by car from the seaside resorts on the coast. The visit of the old city is absolutely worthwhile, even if the hustle and bustle is a little annoying. Ronda is one of the most beautiful and interesting cities in Spain.

Ronda is an old city with many buildings worth seeing. But the absolute highlight is the location of the place. Spectacular things are hardly possible. The old town is separated from the rest of the city by a deep abyss. Three bridges connect the old town with the rest of the village. These buildings are a top achievement of the architecture and the most popular photo motive in Ronda. The New Bridge is the most famous, next to it there are the Old Bridge and the Arab Bridge.

Old town: If one crosses one of the bridges into the old town, one is in the tourist centre of Ronda. In the summer, there is a lot of crowding here, one should better come in the early morning or evening, when the mega tourist streams are gone. Almost every house is a sight here. The old town is not very big, you can reach every point in 10 minutes on foot. Large parts of the old part of Ronda are Arabic influenced. The Arabs conquered over many centuries in the Middle Ages large part of Spain.  Worth seeing are for example the Arab baths, the palaces and the monastery church. Also the still existing sections of the city wall and much more should be seen. The old town is called „ciudad vieja“ in Spanish. But many locals also simply say „La Ciudad“, which simply means „the city“.

Neustadt: On the other side of the bridges there are also some buildings worth seeing for tourists in Ronda. Above all, this is the world famous bullring of Ronda. The city is the cradle of bullfighting in Spain. Ronda is the birthplace of the modern bullfight, which is so controversial today. The arena can be visited, which several thousand tourists do every day. It is the most visited bullring in the world. The new town is also called „El Mercadillo“, the deep gorge between the old town and the new part is called „El Tajo“ (pronounced El Tacho). 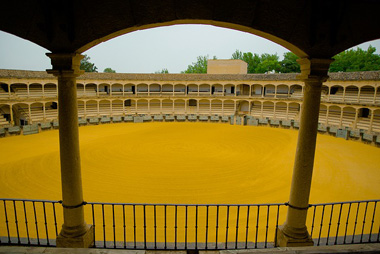 Orientation Ronda: The railway station and the bus station are in the new part of town, about 300 meters apart. From here you walk about 20 minutes to the old town. The bullring of Ronda is about 15 minutes away, on the way to the city centre. From the Arena it is only a 5 minute walk to the Old Town. In the new town of Ronda there are many shops and a pedestrian zone. Here you can also find a huge number of hotels and especially restaurants. For many, the centre of Ronda is the Plaza Espana in the new part of the city. Here is the „New Bridge“ to the Old Town, the most photographed place of Ronda.

Tourism Ronda: We didn’t find commerce in Ronda very pleasant. Some houses were converted into a kind of private museum. For about 5 Euro entrance fee one gets to see some interesting sounding things. They are usually less exciting, who has a limited vacation cash, should avoid these private museums. We have seen similar things in Spain so far only in the village of Guadalest near the Costa Blanca in eastern Spain. In Ronda you will also find many souvenir shops, fast food restaurants and the like. Quite a few restaurants in Ronda offer rather low quality at quite high prices. Quite a few holidaymakers have the unpleasant feeling to be excluded in Ronda. The perhaps best-visited restaurant is the Mc Donalds at the central Plaza Espana next to the bridge to the old town. Here, one at least knows what one gets. Many Asian, English and American tourists can be found here.

How to get to Ronda: From all major towns on the Costa del Sol there are daily buses to Ronda. Thus, it is not necessary to book a more expensive day trip. The shortest way to Ronda from the Costa del Sol is from Marbella. The buses take about 75 minutes and cost about 8 euros (as of 2015). From Estepona, Torremolinos and Fuengirola (all three big holiday resorts on the Costa del Sol) there are also direct buses to Ronda. They all take the road via Marbella. The bus ride up to Ronda is absolutely worth seeing. One drives through woods and often has a great view back to the coast and the mountains. From the big city of Malaga there is also a train to Ronda every morning at about 10 am. The train goes back in the late afternoon. There are also long-distance buses from Malaga to Ronda. But it is much further from here to Ronda than from Marbella.

Climate Ronda: Those who want to come to Ronda in winter should take care that there is no snow. The roads to Ronda are mountain roads, which can be very dangerous when there is snow. You should also consider that many rental cars do not have winter tyres here. Ronda lies at an altitude of over 700 metres. However, snow is rare in winter, but it does occur. In summer it is much cooler in Ronda, especially at night than down by the sea. In spring and autumn one should not forget to bring a jacket during a day trip to Ronda. Also it rains more in Ronda than down at the coast of the sun.

All about Venice sights (one of the most visited cities in Europe).