The village  on the Costa del Sol in Andalusia lies directly on the Mediterranean Sea. Antique sightseeings can hardly be found in the city, even the central church is a modern building. The holiday resort shines above all by a long, clean beach and one of the most beautiful and longest beach promenades in Spain. Many tourists from Germany come to „Torre“, but also holidaymakers from other countries like England or Holland.

Torre is a small town with about 25.000 inhabitants. Although there are also some skyscrapers here, Torre del Mar is by far not as exaggerated as the cities on the other side of Malaga like Torremolinos. Torre del Mar at the Costa del Sol is still Spanish to a large extent. According to our impression, the tourism here has developed healthier than in other places of the Costa del Sol. Many regular guests, families, older tourists and also campers come to the small city. Quite a few people from Germany emigrated to Torre del Mar.

Most of it takes place in the place between the beach and the main street about 100 to 200 meters behind it. Along the wide sandy beach, there is a wide promenade for pedestrians and a bicycle path. The „Paseo maritimo“ (Spanish for way at the beach) is approximately 4 kilometres long and thus one of the longest ways along the sea in whole Spain. 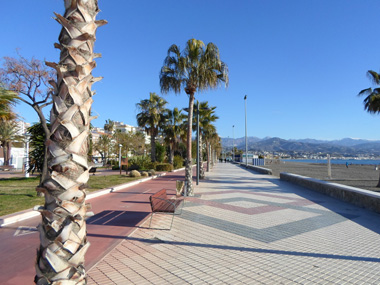 The walk is not, as in other places on the Costa del Sol, stuffed with souvenir shops, fast food restaurants and the like, but rather a green area with playgrounds and bars. The names of the two parts of the promenade are great: they are called Lavante and Poniente (sunrise and sunset). 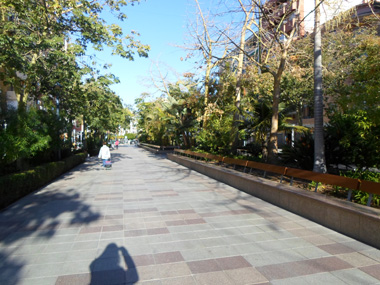 There’s a lot going on here in summer. In the main street you will find many shops, cafes and restaurants.

The locals and many tourists also go shopping in the new large shopping centre „El Ingenio“. It is a gigantic, modern shopping temple as one knows it from Germany. It is about 2 kilometres away from the beach in the direction of the city of Velez-Malaga.

Nightlife / Bars / Pubs Torre del Mar: Sure there is more going on in Torremolinos or Marbella at night, but partying until 4 o’clock in the morning in Torre del Mar is also possible in summer. Many pubs and clubs are in the beach area at the beginning of the pedestrian street „Paseo Larios“ described above. The locals call the area „El Copo“ (the flake). But also in other parts of the city there is plenty of nightlife. A small pub with many Germans is the Barito. A lot of skat is played here.

Overnight Torre del Mar: There are of course, as everywhere, a lot of good and bad hotels. My favorite for apartments is the well managed Las Yucas right in the center at the main street.

Directions Torre del Mar: There is no train station or train station in the city. Buses run frequently (1 to 2 times per hour) to Malaga (the capital of the Costa del Sol) and in the other direction along the sea to Nerja. In summer, there are also a few buses a day directly to Malaga airport, otherwise you change at the central bus station in Malaga. Some connections per day gibt´s also among other things to Almunecar and Granada. Tickets to Malaga are very cheap, about 2,70 Euro easy. At the small bus station there is a ticket counter in the old building which is mostly occupied. If it is not open, you can also buy tickets in the bus from the driver. The small bus station in Torre del Mar is behind the main street in the centre, most buses are operated by the company ALSA.

Local traffic Torre del Mar: Some years ago a tram was built between Torre del Mar and Velez-Malaga. Crazily enough the operation was stopped after a few years. At the moment the operation is under discussion. Apparently the finished tram is not profitable. At the moment there are 4 bus lines, all between Velez and Torre del Mar. Within Torre del Mar you can also walk. To the shopping centre El Ingenio, one can also take the bus if one does not want to walk for 20 minutes. A city bus ride currently (January 2015) costs 1.30 euros, tickets are available from the driver.

Burj Khalifa prices: By elevator to the highest house in the world in Dubai