The Bioparc of Fuengirola is a nice, smaller zoo on the Costa del Sol. It is located not far from the centre of the city of Fuengirola, just one kilometre from the railway and bus stations. 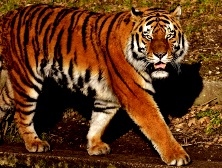 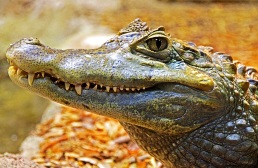 The Fuengirola Zoo is not very big, but there is a lot to see. The focus of the biopark is on animals from tropical countries. They are of course much easier to keep in a zoo in southern Spain than in a zoo in Germany. The weather in southern Spain is usually mild even in winter. The average day temperatures are even in January in Fuengirola about 16 to 17 degrees.

The zoo is divided into three main parts: Madagascar, Africa and Asia. Highlights include tigers, crocodiles, hippos and various monkey species. The highlight of the animals for many visitors are the large Komodo monitors (up to 3 meters long lizards).

A monitor (Komodo Island in Indonesia)

The circular route is not particularly long, most visitors are through after one hour. There is also an animal show. This takes another 20 minutes. In a small stadium different animal species are presented one after the other. The audience is partly integrated into the presentation. We especially liked the big vultures, which fly only a few centimetres above the heads of the spectators.

Catering: In Bioparc Fuengirola there are two restaurants that do not offer cheap food. According to the rules of the zoo, you are not allowed to take any food with you. The best thing is to eat before, most visitors hardly stay longer than 2-3 hours in the zoo. On hot days you should bring your drinks to the Fuengirola Zoo.

Admission (early 2023): We can recommend a trip to the nice Bioparc in the south of Spain without any problems. The entrance fees are, however, as at many big sightseeings in Spain, not exactly a bargain.

If you buy your tickets on the internet on the serious German website Getyourguide.de, you pay the following entrance fees for the Biopark Fuengirola (as of March 2019)

Adults and children from 10 years: 22 Euro

Infants under 3 years are free.

It should be remembered that this is a private zoo financed by entrance fees. The demonstration with the animals is included in the entrance fee to the zoo.

Opening hours 2023: The Bioparc Fuengirola (Zoo) is open daily from 10 am all year round. In winter it closes at 6 pm, in high season it is open until 11 pm. In the periods in between, the zoo closes at 7 p.m. or 8 p.m. depending on the season and the onset of darkness. The opening hours of the zoo at the Costa del Sol in Andalusia are only limited on some very important holidays.

How to get there: Public transport takes you to the Fuengirola bus station or to the Malaga S-Bahn terminus. From there, take the wide, busy „Paseo Jesus Santos Rein“ towards the south-west. After almost 1000 metres you are at the entrance of the Bioparcs. The city hall of Fuengirola is only a few metres away from the zoo, behind the city hall begins the central pedestrian zone of the city at the Costa del Sol.

You can find more information about the city of Fuengirola in this Internet travel guide on this page.

Fuengirola is a large tourist town on the Costa del Sol. Other big tourist resorts like Torremolinos or Benalmadena can be reached by train several times per hour. There are good bus connections between Fuengirola and the famous tourist city Marbella. There are also frequent direct trains to the city of Malaga with connections to long-distance services (Madrid, Seville, etc.).

There is a similar, much larger biopark in Spain in Valencia, several hundred kilometres away: More information about Valencia Zoo