The Prado Art Museum is considered to be the most visited and important sight in Madrid. It is by far the largest and most famous museum in Spain. According to many experts, the Prado is the most important museum of art in the world. About 3 million visitors come to the Prado Museum every year. To our knowledge, only the Louvre in Paris sells more tickets as an art museum. Despite the huge exhibition space, there is a lot going on in Prado. Often there are long queues at the cash desks and in front of the very famous paintings. It makes sense to buy tickets before in the internet and to come outside the rush hours. On this website you can buy tickets for the Prado Museum.

The Prado in Madrid exhibits mainly paintings from different periods, especially from the late Middle Ages to the beginning of Modernism around 1800, but visitors can also see sculptures, drawings and other works of art. Among the world-famous paintings in the museum Prado are the works of the very famous Spanish painters. On the other hand, there are also paintings by Italian and Central European painters such as Rembrandt, Dürer or Hieronymus Bosch.

The museum Prado is already about 200 years old (opened in 1819). About 10 years ago, it was extended by a new building and today it is considered to be the biggest art museum of the world. The art gallery is easy to reach by public transport and is located right in the center of Madrid.

First the good news: All children and teenagers up to the age of 18 as well as students up to the age of 25 with a student card can visit the Museo Prado in Madrid free of charge. The famous queues at the Prado entrance are often very long. Much less time you have to wait with a so-called skip-the-line ticket. Such tickets are a good thing for such big sights as the Prado. On many mornings, several 10,000 people want to visit the art museum, which is almost like a Bundesliga game.

On site with queues at the museum ticket office, the Prado costs as far as we know 18 euros entrance fee (as of early 2023). We recommend the purchase of tickets on the well-known and reputable ticket website Getyourguide.de. Advantages are among other things that it is a German-language web page and that one can cancel the tickets up to 24 hours before the date free of charge. Besides the ticket costs without queuing with 15,75 euro hardly more than locally.

The Prado is closed on 3 very important holidays (New Year’s Day, 1st May and 1st Christmas Day). On 3 other holidays the opening hours are reduced to 4 hours (Christmas Eve, New Year’s Eve and Epiphany 6.1.). We think that 4 hours are not enough. In general, one should arrive relatively early, as the Museo Prado is very, very large.

A more central location in the centre of Madrid is hardly possible. Madrid’s main train station is only a few minutes walk away. The station and the underground station are called Madrid Atocha. The metro line L1 stops here.

If you take the subway line L2 into the city centre, the station „Banca de Espania“ is the best choice for visiting the art museum Prado.

Of course, there are also many local trains from the suburbs of Madrid and long-distance trains stopping at Atocha main station. Also many bus lines of the Madrid local transport stop around the world-famous museum.

Museo Prado on the city map

What’s there to see at the Prado?

A lot! 3,000 paintings, hundreds of which are world famous. Finding them is not always easy. A trick: We recommend looking for larger crowds. There is usually also a very important picture. The exhibition is huge, after some hours in the museum we were not even in all rooms.

Besides paintings there are also thousands of drawings and hundreds of sculptures and other 3D works of art. Some dozens of paintings are really world famous. In the following now an overview of some very important pictures in Prado Madrid (list not complete):

Adam and Eve: Double painting, on one single picture Adam is to be seen and on the other Eve. They are naked, in the picture of Eve there is a snake and an apple on a tree.

Self-portrait with landscape: Albrecht Dürer is probably the best known artist for self-portraits in history.

Diego Velazquez: A great painter from the Baroque period in Spain, born 1599 in Seville, died 1660 in Madrid. Several very important paintings by this artist can be found in the Prado Museum.

The handover of Breda: The painting shows the surrender of the Dutch army and Spain’s victory in the small but strategically important city of Brenda in the Netherlands in 1625. Velazquez painted the gigantic 10 square metre picture 10 years after the battle of 1635.

The Drinkers or The Triumph of Bacchus: Dionysos (Baccus) was the god of wine in ancient Greece. 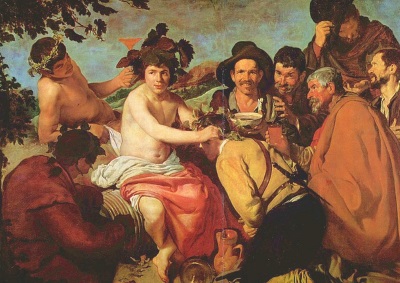 El Greco: This painter was Born on the Greek island of Crete probably in the village of Fodele as Domenikos Theotokopoulos in 1541. He emigrated first to Italy and then to Spain and is almost only known there under the name El Greco (the Greek). He died 1614 in Toledo (Spain).

Famous in the Prado of El Greco are the pictures „The Holy Trinity“ and „The knight with his hand on his chest“.

Titian: One of the greatest of the many famous artists from the great time of Venice. Titian was born in northern Italy in 1489 and died in Venice in 1576. In Spain one often reads the name „Tiziano“.

Emperor Karl V after the battle of Mühlberg: Great picture (oil paints), size about 3 meters by 3 meters. It shows the last Roman-German emperor with armour after a victory in a battle on a horse.

Hieronymus Bosch: Very famous painter from the Netherlands, in Spain Bosch is also known under the name „El Bosco“ (The Forest). The Renaissance artist lived from 1450 to 1516. Some of Hieronymus Bosch’s paintings are public favourites in the Museo Prado in Madrid.

The Garden of Delights: One of the absolute highlights at Prado. The painting is divided into three parts. Bosch painted the Garden of Eden on the left, the Garden of Desires in the middle and Hell on the right. Visitors to Prado marvel at the many interesting details. 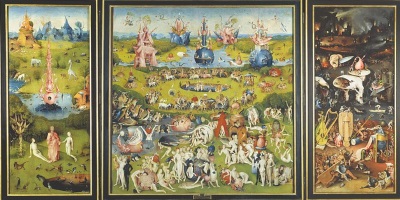 The hay wagon: also a three-piece work of art by Bosch. On the left the Garden of Eden, on the right hell. In the middle is a hay cart with many strange figures. There are many interpretations of the picture in the Prado. Bosch probably painted it a few years before the Garden of Delights.

The family of Charles IV: Hardly any picture is better known in Spain. It shows about 10 persons from the king’s family.

The list of world-famous works in the Prado Madrid Museum is much longer. Only a few examples have been given.