With 3.5 million inhabitants, Barcelona is the second largest city in Spain after Madrid. Barcelona offers tourists an almost infinite number of sights and is one of the top 10 destinations for city breaks in Europe. The location of the city on the Mediterranean Sea, the good weather and the many sights make Barcelona an almost perfect city. In the city centre there are a large number of restaurants, clubs and bars that are almost always well frequented.

You should buy the Hola BCN Travel Card on the Internet beforehand. The network card for public transport is available for different periods.

The best travel time for Barcelona is summer. The sun shines almost every day. Those who do not tolerate the heat so well can also come in spring or autumn. During these seasons, however, it rains in Barcelona much more often than in summer.

The biggest attraction in Barcelona is the Sagrada Familia church, designed by Antoni Gaudi at the end of the 19th century. It is probably the most visited attraction in Spain. The basilica is still under construction. Many people want to visit the world famous modern church every day. Therefore, it makes sense to buy tickets on the Internet to avoid very long waiting times:

The probably most important old building in Barcelona is the big cathedral that bears the long name „La Catedral de la Santa Creu i Santa Eulalia“. The church in gothic style was built in the 13th and 14th century. In the early afternoon, the interior of the cathedral is open daily for several hours for visitors. Around the church there is the Barri Gotic, a district dominated by Gothic and other medieval styles. It is probably the most beautiful area in Barcelona. Beside the cathedral, for example, the city hall is one of the sightseeings of the quarter. 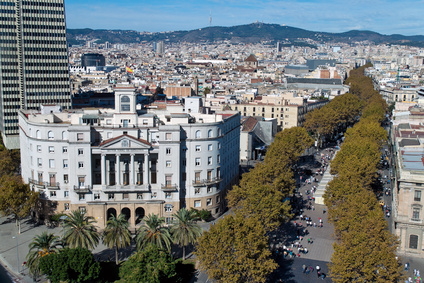 Every tourist in Barcelona goes up and down La Rambla once. By far the most famous street of Barcelona is the meeting point of the city. It is a wide, long avenue with shops, many artists and street musicians. At night it is the party mile of Barcelona. Caution: Unfortunately, there are probably more pickpockets, tricksters and the like here than anywhere else in Spain. La Rambla connects approximately the ancient city centre of Barcelona with the modern buildings around the harbour. Almost every section of La Rambla, which is more than one kilometre long, has its own character – for example the bird traders are interesting.

The market Boqueria is one of the most visited sights of Barcelona tourists. The noisy and very lively market with its food stalls and small restaurants has the typical Mediterranean flair that is so popular with Central European tourists.

Museums are among the most important sights of Barcelona. As typical for Spain, these are mainly art museums. The museum Joan Miro is a huge museum for modern art (about 10.000 exhibits!). The famous Picasso Museum of Barcelona is an absolute must for fans of the artist. The CaixaForum is a very famous museum for changing special exhibitions. 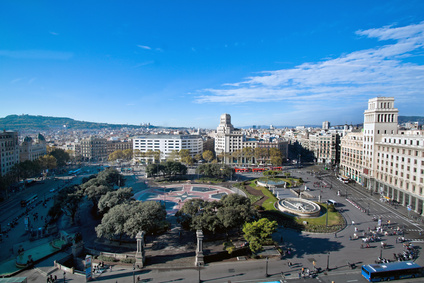 The fountain Font de Canaletes at Placa de Catalunya (picture above) is the central point of the city for many locals. This is where the FC Barcelona football club celebrates its frequent national and international titles. The water of the fountain is said to taste especially good. According to an old legend, everyone who drinks the water should be enchanted by Barcelona and always return to Barcelona.
Travelling is especially fun if you also try the local food and drinks. In Barcelona, sausages, wild mushrooms, the local Romesco sauce and of course the wine tasted particularly delicious. According to one reader, good restaurants are: L’Antic Forn, Patricio, Restaurant Masia Can Borrell and Casa Felix. The sausages are mostly pork with pepper and other spices.

Our tip local transport tickets Barcelona: Tickets (day tickets) for the very well developed local transport in Barcelona can be bought on this website in advance. Then you don’t have to deal with the Spanish machines or with employees who don’t understand your language.

Of course, beaches also belong to the sightseeings of Barcelona. The probably best beach of the metropolis is called Platja de la Barceloneta. But in summer, the beach is quite crowded. One can rent windsurfing and kitesurfing equipment at the city beach. The beach is ideal for surfing. Nudism is possible at the beach Platja de la Mar Bella.

Another important sight of Barcelona are the hypermodern buildings at the harbour (see picture). Here is the famous gigantic aquarium, which is visited by over a million people every year. The football museum and the stadium of the FC Barcelona attract approximately as many tourists. The Camp Nou is with 100.000 places one of the biggest pure football stadiums of the world.

For some years now, Barcelona has been connected to the Spanish high-speed rail network. Journeys to Madrid or even to southern Spain take only a few hours. There are direct trains to Malaga in the south coast of Spain. Barcelona has also recently been connected to the French TGV network. One can now drive to Lyon in about 5 hours, to Paris in 6 hours. A train journey with changing between Barcelona and Saarbrücken takes only 10 hours, to Cologne, Frankfurt or Karlsruhe about 11 hours. Unfortunately, such tickets cannot be bought on the Internet from Deutsche Bahn. But on the website of the SNCF (French Railways) this works excellently in German. Another fast, national train route goes from Barcelona along the Mediterranean coast to Valencia. Of course, the city also has a large airport. Barcelona is also the most important ferry port for the Balearic Islands, especially Mallorca. The ferries depart in the middle of the city, a few hundred metres from La Rambla.